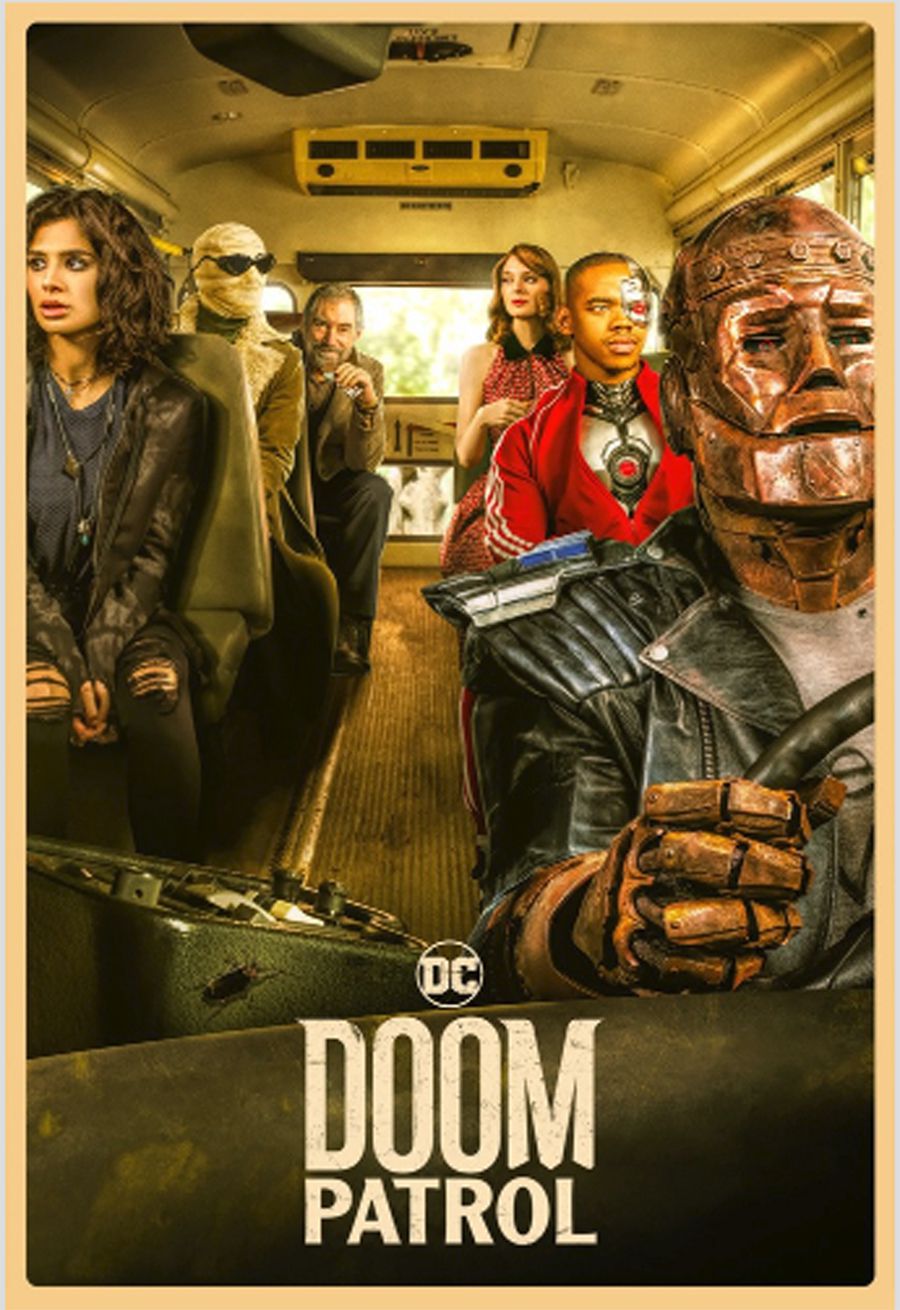 The first episode of “Doom Patrol” takes place shortly after the events of season one of “Titans” and is in fact narrated by the series main villain, Mr. Nobody (Alan Tudyk).

Simply titled “Pilot”, this episode serves as the origin story for the team with individual parts focused on the main characters Cliff Steele/Robotman, Rita Farr/Elasti-Girl, Larry Trainor/Negative Man and Jane/Crazy Jane. Each of the characters isn’t your run-of-the mill superhero types by any means. These people are horribly damaged from very traumatizing events in their life…whether it’s a horrible car accident or cosmic interference…each member of the Doom Patrol is simply trying to deal with and exist with their condition.

Taken in by Niles Caulder AKA the Chief (Timothy Dalton), these four outcasts are learning to get along with each other as they live in seclusion in “Doom Manor”. That is until they decide to take a field trip into the local town of Cloverton when the Chief heads out for a few days. What could go wrong, right?

Here we are introduced to Mr. Nobody in his supernatural form. With the Doom Patrol exposing themselves to the world after a disaster in town, it made it easy for Mr. Nobody to track down the Chief and make him pay for his involvement in becoming the thing that he is today. What does Mr. Nobody decide to do? Open a portal to another dimension in the middle of the street, of course! The portal sucks in the entire town as well as the Chief and Crazy Jane. Not knowing what to do, the group splits up and goes their separate ways.

Episode Thoughts: What I like the most about the Doom Patrol is their weirdness and total reluctance to get involved in anything…outside of Cliff Steele who is the only one that seems to have a semblance of a do-gooder in him. When things go bad, instead of trying to right the wrongs, most of the team cowers in fear or tries to run as far away as possible. This will definitely lead to plenty of hero moments along the way but also some humorous situations for the reluctant wannabe heroes.

The casting is great and “Doom Patrol” certainly embraces its comic book roots with campiness, goofiness and humor but it also has a hard R edge to it which keeps the beat with “Titans”. The universes are connected and have a consistent tone. Don’t watch this with your kids…unless they’re older than 17!

The second episode of “Doom Patrol” is titled “Donkey Patrol” and it follows the team as they try to get their shit together and search for the Chief and Crazy Jane. It also introduces a well-known DC character to the team, hopefully as a permanent member of the roster.

In the first episode we discovered that a white donkey is the embodiment of Mr. Nobody’s chaotic powers. Cliff, being the only one interested in finding Jane, the Chief and the entire town of Cloverton takes matters into his own hands…to no avail. We are also introduced to Victor Stone AKA Cyborg, as events lead him to Cloverton where he easily manages to detain the white donkey, much to Cliff’s frustration.

Cyborg has known the Chief for years and feels that he owes it to him to find him as well as Jane and the rest of the town. It doesn’t take too long for Cyborg to realize how inept and dysfunctional Doom Patrol is before he decides to take things into his own hands and organize and motivate the rest of the team into helping out. With the help of Elasti-Girl and Negative Man, Cyborg discovers that the gateway into the alternate dimension is inside the mouth of the white donkey. He manages to persuade Negative Man and Elastic-Girl into helping him while Cliff is left to deal with an angry Crazy Jane, who was spewed out of the mouth of the white donkey earlier on in the episode.

Once inside the alternate dimension, Cyborg, Elasti-Girl and Negative Man encounter Mr. Nobody as a narrator to the events in that realm. Mr. Nobody goads on the three as they are forced to re-live their past tragedies and face what they have become. With the help of Negative Man’s alien entity, they manage to escape that dimension unharmed but are not able to find the Chief.

With the Chief still missing, Cyborg decides that he needs to stay until the Chief is found and the rest of the group reluctantly agrees.

Episode Thoughts: The addition of Cyborg was a welcomed surprise and Jovian Wade does a wonderful job of portraying Cyborg as a hero as well as an outcast also trying to find his place in the world. While he believes that he is destined for great things, he seems to relate to the group of misfits in which he encounters in Doom Manor.

There are also a lot of character progression as well as interesting dynamics between certain team members. They still have no idea what they are doing, but the addition of Cyborg gives them a semblance of hope…although not welcomed at all times. There have also been a few action sequences but we have yet to really see the team unleash with their powers.

“Puppet Patrol” follows the team’s efforts to locate the Chief and somehow find a means to get to his location.

With the help of Cyborg, the group manages to find a clue about the whereabouts of the Chief due to a picture of the white donkey in Paraguay in 1948. Something happened there of great importance since the Chief kept that picture around all these years. But Paraguay is a hell of a long ways away…how will the team get there?

Cyborg has always had help from his father Silas Stone and S.T.A.R. Labs in the past so he believes that the problem is solved. Alas, poor Cyborg…such is not the case as his father informs him that since he wants to stick around with the Doom Patrol and do things on his own, that’s exactly what will happen. Now with no private S.T.A.R. Labs jet, the team has to resort a long road trip on the short bus.

With the team functioning as best they can with each other, it’s inevitable that something will go wrong, and it does. With Negative Man trying to coexist with his cosmic half, the two have a disagreement and the entity destroys the bus’s engine stranding the team in the middle of nowhere. Cyborg and Cliff are left with pushing the bus to the nearest motel for the team to bunk for the evening. Thankfully there is one room left…for all five of them together!

Dysfunction arises in the morning and Crazy Jane shifts into one of her other personalities and instantly teleports her, Cliff and Negative Man to Paraguay. As mentioned by Cliff, that would have been nice to do earlier. Elastic-Girl and Cyborg are left behind to do some sole searching. Rita feels useless and Cyborg feels lost without his resources at his disposal.

As the rest of the team arrives in Paraguay, the soon discover that there is a place run by Germans that gives people superpowers for a cost. Sounding like a good place to start, the group hitches a ride on the bus in order to gain some insight on the Chief’s whereabouts. After sitting through what seemed like a 5 hour puppet show welcoming them to Fuchtopia. Things don’t seem to be what they are as discover that Heinrich Von Fuchs, the man responsible for Mr. Nobody is in charge of the place and wants the Doom Patrol dead. One of the most epic fights scenes occurs as Crazy Jane and Robotman annihilate some Nazis all to the tune of the Dead Kennedy’s song “Nazi Punks Fuck Off” playing in the background.

While fighting ensues, Negative Man enters Von Fuchs power chamber and has a one-on-one with his cosmic half and realizes that everything bad that has happened to him is no one’s fault but his own. Far north in Alabama, Cyborg and Elasti-Girl stop feeling sorry for themselves and decide to take action, whatever that may be. Cyborg is contacted by his father and realizes that he has been spying on them the whole time, and informs them that they can use the private jet to help their friends. Feeling slighted and taken down a notch, they reluctantly agree and head out to get their friends.

Arriving in Paraguay too late to help out, they meet up with the others and head back home. Discovering that the Chief is apparently in the form of a puppet from the welcome show, the team heads back to Ohio sad and dejected. They’ve been through traumatic events and done some things that they shouldn’t have done, but simply put, they’ve all had to swallow their pride at one point during this episode. Whether they learn and grow from these events or regress back to their former selves has yet to be seen.

Episode Thoughts: “Puppet Patrol” finally showed Cliff in combat and provided some great moments for each team member including Cyborg who is learning to step out on his own but is still new at this superhero thing.

Also, kudos for including some Dead Kennedys as the soundtrack to a Nazi ass-kicking as I wouldn’t ask for it any other way.