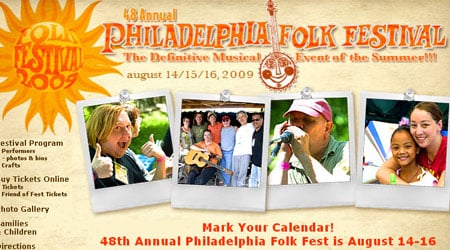 Here’s the press release about the festival:

August 14-16 at the Old Pool Farm near Schwenksville, PA. After a very successful showing last year, Point Entertainment’s Rich Kardon and Jesse Lundy have been brought back to provide artistic direction. “We are excited to again work with the Philadelphia Folksong Society and the Philadelphia Folk Festival to build on the foundation that was crafted last year,” said Kardon. The resulting roster reads like a Who’s Who in the music buzz today, offering a collection of both superstars and rising stars who will join together for this three-day extravaganza of traditional and contemporary music, dance, crafts, camping, and children’s activities.

As if this amazing line-up weren’t enough, Jesse Lundy hinted that there were more surprises yet to come. “We have a couple more world-class acts; I mean major headliners, that we can’t announce just yet, so stay tuned!” teased Lundy.

Returning for his 48th consecutive year as host is WXPN-FM DJ Gene Shay who has been called the Godfather of Philadelphia Folk Music. Shay has delighted Folk Festival audiences for years with his silly jokes and warm, friendly style. He’s been the same golden voice on the radio, playing folk artists every Sunday night, for most of our lives. He also helped put together the very first PHILADELPHIA FOLK FESTIVAL in 1962 and has been the emcee every year since.

The campground at the PHILADELPHIA FOLK FESTIVAL is considered the Ultimate Folk Festival Experience. Settle into the “40-acre living room” where jamming and camaraderie is shared; where friendships and memories are made that will last a lifetime. Exclusive to All-Festival Camping Ticket holders, there will again be the Thursday Night Concert on the Camp Stage where legendary World Cafe(R) host David Dye will welcome some unique musical guests, as yet to be announced.

The PHILADELPHIA FOLK FESTIVAL is a perfect family event, too. You will find an unrivaled selection of attractions for the kids, especially in Dulcimer Grove, the shady area between the Crafts Stage and the Camp Stage, where puppeteers, jugglers, storytellers, hands-on crafts and of course, kid-oriented musicians make it a haven for folk fans 12 and under. Older kids, 12 to 16, will again be eligible for the special “youth ticket,” allowing them into the grounds for half the regular gate price, when accompanied by an adult.

Tickets for the PHILADELPHIA FOLK FESTIVAL are now on sale and can be purchased online at www.folkfest.org. Daily event tickets with Early Bird pricing start at $44.00. Attend all three days and camp for just $145.00 in tent camping and $170.00 in vehicle camping!