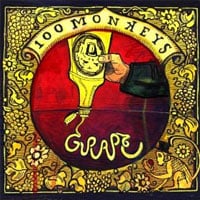 I’m blissfully unaware of anything Twilight, but apparently 100 Monkeys boasts one of the movie’s stars. I have to say, that’s quite surprising. 100 Monkeys not only have an awesome name, but their sound is as far from radio-friendly teenybopper as you can get.

The band bounces between different retro styles, some very retro – there’s the soul bravado of “Arizona,” the hideous disco of “Orson Brawl”, a good 50s-style r&b ballad (“Looker”), the twang-infused “Junkie,” the syncopated, muted-trumpet danse macabre of “Reaper,” and so forth.

The album is exceptionally, maybe even distractedly, eclectic, but the permeating sound is that of feverish, smoky-club anti-folk, complete with bongos and a semi-spoken word delivery. Kind of like if Tom Waits, Ween, Oingo Boingo, and CAKE fused and turned into a giant hip daddy-o beatnik.

This isn’t a “great” album that you’ll want to listen to repeatedly, but the band performs competently and executes a more accessible take on decades of American music than, say, the genteel insanity of The Residents.