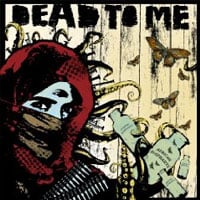 Dead To Me plays catchy pop punk that’s similar to One Man Army, that could because members of OMA were in the band. Jack Dalyrmple was in the band for the last full length and EP, but is absent this time around. Jack got married and had a baby so he’s off being a husband & father like he should be. That left Chicken & Nathan in charge of vocals. People expecting hear similar albums from the past might be disappointed in this.

“X” starts off with a slow, reggae tune that’s cool for an intro, but it’s not until the second track “Modern Muse” where things pick up. “Modern Muse” sounds like something Jack would write & sing, so I felt that was the strongest song on “African Elephants.” I always prefer Jack’s vocals over Chicken’s but I feel Chicken comes into his own on this album. Well Nathan sings on the album as well. When listening to these songs, I feel the album lacks something but I can’t put my finger on it. The songs sort of lack a certain punch in them; some of the songs just seem flat. I give the band credit for continuing on without Jack and trying to do something different. Some songs it works, some of it doesn’t. I actually liked when they did the reggae style song “X” because it was a bit different. But you don’t hear that style again on the album. I’m not sure what to think of this album yet; there were some good tracks but something is lacking.

Bottom Line: The album lacks a certain punch but this is still worth listening to.
Notable Tracks: Modern Muse, A Day Without War, Fell Right In
Overall Rating: