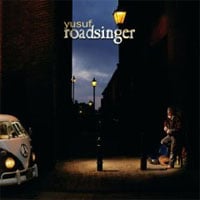 Although Yusuf Islam had previously recorded several Muslim albums, including the children one “A is for Allah,” he returned to the pop/folk music that he originally became known across the globe for in 2006 with “An Other Cup.” It was a full 28 year break from the pop/folk music world that he turned his back on, as Cat Stevens while still very much at the top of his game. And now with the 2009 release of his 2nd “mainstream” album as Yusuf we discover that’s 2006’s “An Other Cup” was no fluke. The opening track “Welcome Home” picks up right where “Green Fields,Golden Sands” left off, and doesn’t let up with the prime folkiness (for Folks sake!) This is clearly the Cat Stevens of old, sounding pretty much like he did in 1975.

Its a sign that Yusuf may have finally accepted and embraced his past as Cat Stevens that even the CD says “The journey of music continues from Yusuf the man previously known as Cat Stevens”, even when the CD is loaded onto iTunes under Artist it reads “Yusuf (Cat Stevens),” for further and absolute proof of this look and listen no further to one of the albums highlights: “Be What you Must,” when the song begins you instantly think you are listening to a Cat Stevens song of old…..because, well, you kind of are-refer to song/buy the album to find out which one (ooooh the suspense!!), this song is soothing as “The Wind” from old-school Cat, and features some killer kid backing/harmony vocals to boot! Another instant classic is the title track “Roadsinger (To Warm You Through the Night).” It is worth mentioning there are guest turns on the album from Holly Williams (Daughter of Hank Jr, Granddaughter of Snr. and Half Brother of Hank III-pheeeww!) and James Morrison,who is a big star (for reasons I’m still unsure) across the pond in Ireland and the UK.

Bottom Line: Simply put, “Roadsinger” is a must-get album for anyone who likes great music. Highly recommended, Don’t Kick the Cat – Get Roadsinger today!
Notable tracks: “Thinking ‘Bout You”, “The Rain”, “Be What You Must” and “Roadsinger”
Overall Rating: