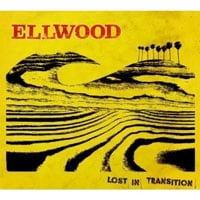 While we wait for a new Mad Caddies full-length, this might be the next best thing. Chuck, Todd and Graham from The Mad Caddies, and keyboardist Dustin from Cherry Poppin Daddies decided to jam out and record some laid back reggae/ska music. Ellwood’s Lost in Transitions is the result of that and it’s a nice album to put on while chillin’ with your friends.

While I prefer to the faster Mad Caddies style, this is just as good. Whatever style he plays, Chuck does an awesome job with it. He’s a natural when it comes to singing for ska and reggae bands. The Deal” is a good track to open up as it puts you in the mood for the rest of the album. Another noticeable thing is how well the keys are in the band. A good example of that is on “Wrong Night.” The album is very keyboard-driven and really like the sound of the band. I’m wondering if Ellwood will incorporate some of this sound when they finally get around to making another Mad Caddies album? Or will Ellwood still continue on and release reggae, keyboard-driven songs instead? There aren’t many songs that really stand out per say, but they blend in nicely and sound good.