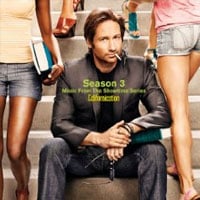 When people think of Californication, music isn’t the first thing they think of. They think of sex, nudity, and hilarious moments from Hank Moody, played by David Duchovny. A Music geek like me will notice the music, which I have, but I’m not sure other people will. Bands or musicians like Rolling Stones, Bob Dylan, Rob Zombie, Nick Cave, and Steve Earle have been played on the show. For the third season, some of the bands or musicians on this soundtrack include Rob Zombie, Widespread Panic, The Monks, G.G. Allin & The Criminal Quartet, Spider Problem, John Neal and Blind Pilot.

The third season is about Hank becoming a college professor, which I can only imagine what type of crap he gets involved with this time around. I haven’t seen an episode yet since I don’t have Showtime, but I do know that Susan Sarandon’s daughter Eva Amurri is on the show. All I can say about her is, WOW! But anyway, back to the soundtrack. A lot of the music is rock music, which is fitting since Hank reminds me of a rock star anyway. I can kind of figure out the type of music that the creators like, which is either soft singing rock or loud noisy 60’s garage/surf rock. The show takes place in California after all! If you enjoy the music on the show, then give Season 3’s soundtrack a try.