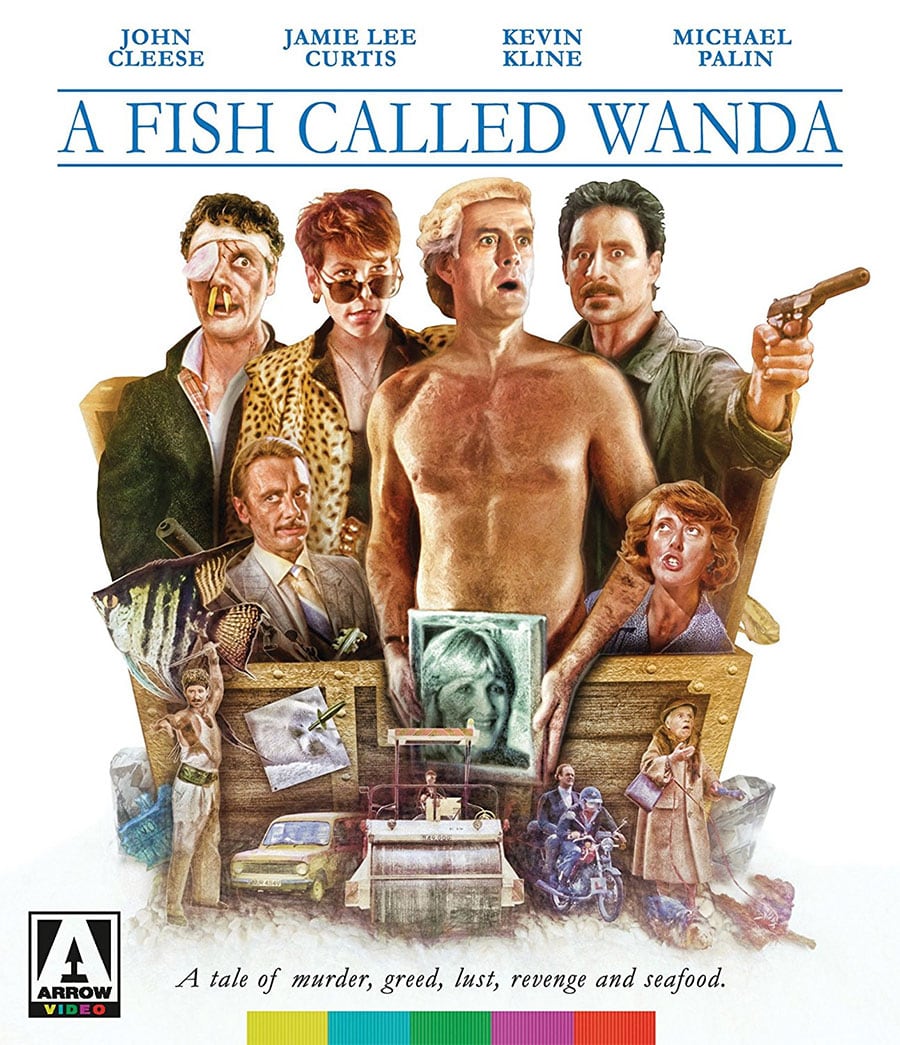 A Fish Called Wanda is remastered on Blu-Ray again, this time with a 4k restoration! If you don’t currently own the movie on Blu-Ray, now’s a good time to get it.

The movie is about a group of thieves who pull off a jewel heist in London. There’s gangster George Thomason (Tom Georgeson), friend of George’s and stuttering animal lover Ken (Michael Palin), con artist Wanda (Jamie Lee Curtis) and weapons expert Otto (Kevin Kline). Once the heist is pulled off, Wanda and Otto double cross George to call the police on him. What they don’t know, George moved the loot so they begin to find ways to find the location of them. To achieve that, Wanda tries to get close to George’s lawyer, Archie (John Cleese).

A Fish Called Wanda is perhaps one of my favorite movies of all-time, if not definitely top 10 favorite comedies. I have to watch it every year. It’s been a few years of watching it because I only had it on DVD and it was removed on Netflix so I didn’t get a chance to watch it lately. Thankfully, Arrow Video restored it and made the movie look amazing on Blu-Ray. The colors are vibrant and it looks the best I’ve seen. You can still tell the movie is from the 80s since it has that slight blur to it, but it still looks excellent.

The movie itself still holds up after all these years and doesn’t feel too dated. It’s original, still very funny and great cast. You’d think having John Cleese in a movie, he would the funniest person but he’s not since that goes to Kevin Kline. He did win an Academy Award for the role after all. John Cleese has moments of his brilliance like when Otto shows up at his house and talking to his wife. John Cleese’s confused and delirious face on what was happening is just priceless. Jamie Lee Curtis is so good in this as well, not to mention very sexy. I still find it funny she just drops to her knees whenever she hears a different language like Italian or Russian. Michael Palin as Ken couldn’t have been better. Would this type of handicapped-speaking character and poking fun of him be allowed without criticism in this day and age? I doubt it.

The script from Cleese and Crichton is part of the reason why this movie is timeless. The dialogue and quotes are still some quotes I speak in everyday situations. It’s not just one character with the best quotes, it comes from all 4 main characters. For the most part, the comedy is grounded but there are touches of Monty Python absurdness like Ken accidentally killing the dogs, Ken running Otto over with a cement roller and Otto climbing onto the airplane at the end. My favorite scene is when Otto shows up at Archie’s house and gets into argument with Archie and his wife. There’s so many scenes to pick but something about that makes me laugh every time I see it.

This Special Edition Blu-Ray contains a bunch of featurettes, documentary, and commentary that has been included with other releases in the past. Like I mentioned above, this is 4k remastered restoration from the original negative. Even though some of this stuff has been included with other DVD/Blu-Ray releases, it’s good to still have it and have it all in one spot. There are new interviews with Vic Pratt of the BFI National Archive and production designer Roger Murray-Leach and others. There’s loads of deleted scenes and other bonus content to watch, even if they are old.

If you don’t own A Fish Called Wanda on Blu-Ray, this is a great Blu-Ray to own. I’m a bit disappointed this doesn’t come with Digital HD though. Perhaps Arrow Video doesn’t have the rights to do that or not but wish all Blu-Ray releases came with that going forward. The comedy still holds up over the years and still one of my favorite movies of all-time.