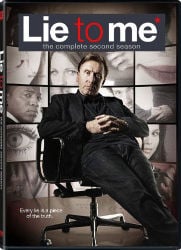 Tim Roth aka Dr Lightman is back with an exciting Season two. New and unique cases are brought to The Lightman Group, along with Lightman’s team, Season Two incorporates a few new faces as well introducing Mekhi Phifer as Agent Reynolds of the FBI. Reynolds works hand in hand with Lightman, as the two work to bring enemies to justice using Lightman’s unusual profession, being a human lie detector. Showrunner Shawn Ryan, of The Shield fame, brings some added and much needed grit to the series as cases get weirder and darker, and gives the show some credibility as just not some usual Cop/Crime show series.

Packed with more episodes than Season 1, Season 2 features even more episodes totaling 22, but the series was awkwardly spaced out 6 months apart losing any steam it may had. Thankfully, Lie to Me plugs away on the network and is still alive. The show itself can be viewed as a whole or watched occasionally because most of the episodes deal with closed ended cases and are generally resolved in one episodes. Mekhi Phifer plays a bigger more prominent role in Season 2, who works very closely with The Lightman Group and brings in most of their business by contracting their services. Tim Roth of course is what is awesome about this show. Playing Dr. Cal Lightman, it almost seems like you are watching the real Tim Roth on screen as he slinks across the set and acts mischievous and cunning. His chemistry with Dr. Foster (Williams) is great and frustrating at the same time. Partners in the firm, but a sexual tension has been part of these two characters for both seasons now with slight playfulness and attractiveness. You still don’t really get the big mystery behind these two, though one episode on Season 2 focuses on how they met.

The season two set features blogs and a lie detection tutorial from Dr Ekman, who is the consultant and in which the series based upon. Not to mention a gag reel and a look at Eli Loker, played by Brendan Hines, you also get a slew of extended and deleted scenes. Season Two of Lie to Me was a real pleasure to watch and the cast is excellent together. The episodes are exciting to watch week in and week out and Showrunner Shawn Ryan added a much needed grit to the series as well as somewhat The Shield reunion.