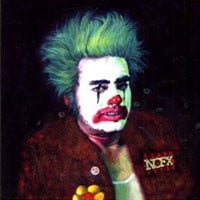 Cokie the Clown is the latest EP from NOFX. Well I guess I shouldn’t call this “latest” since this was released back in November 2009. Hey, I’m a busy guy ok! Anyway, Cokie the Clown’s album cover features Fat Mike looking like a clown, with Alice Cooper eyes. The music video is amusing because Fat Mike squirts all his friends with exploding powdered dust. I know I’d be pissed if that happened to me but what are you gonna do, its Fat Mike.

The EP features 5 songs were recorded during the Coaster album, but just didn’t make it on the album. Honestly, I think they should have just included all these songs on Coaster and just make the track listing longer. Perhaps NOFX just didn’t think these songs fit with the songs on that album? Cokie the Clown is an okay song but I actually prefer the other songs “Straight Outta Massachusetts,” “Fermented and Flailing,” and “Codependence Day” more. The last song is an acoustic version of Coaster’s “My Orphan Year.” I like that version better because it’s more fitting, and it’s quite somber and depressing. Overall, NOFX continue to release great music even if these songs were leftovers from their newest album.

Bottom Line: Excellent songs that should have been included on the Coaster album.
Notable Tracks: Cokie The Clown, Straight Outta Massachusetts, Fermented and Flailing, My Orphan Year (acoustic)
Overall Rating: