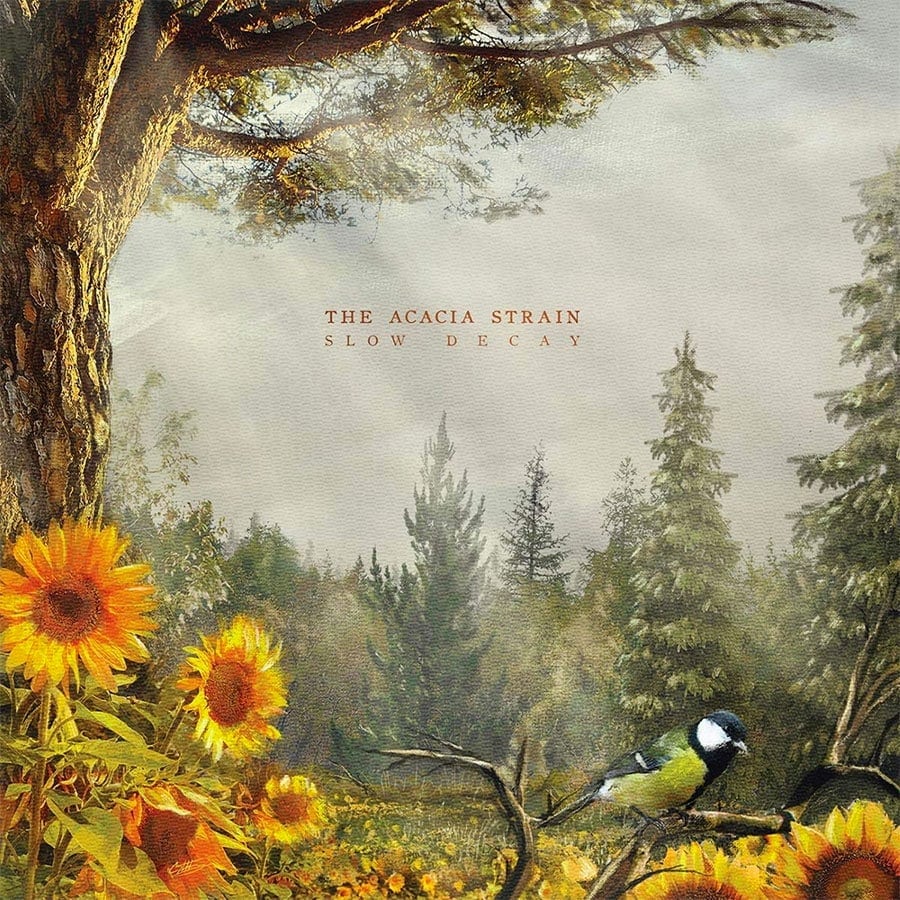 The Acacia Strain return with one of their most ambitious projects yet with Slow Decay. Considering the doom and gloom times we’re in, it’s almost as if The Acacia Strain had been preparing for this. While prior records vocally spoke of ominous apocalypses and plagues, the release of this was surprisingly not deterred by our current plague. The band hunkered down last year in between tours and secretly recorded the It Comes In Waves EP and also recorded something extra. Much like Protest The Hero’s subscription singles series, over the course of a 5 months we got one seven inch that would start art with a letter, the first being ‘D’ in February. As the next single ‘E’ came out the band had hinted more was coming and it appeared the artwork interconnected with the prior EP. This generated a buzz and excitement amongst fans that would eventually see the word “DECAY” spell out amongst all five seven-inch singles. This all of course culminated into one full length, ‘Slow Decay’.

At first I felt a little bamboozled not knowing all the singles would culminate as a full length, but the record collector in me loved the completionist challenge. The full length includes 2 tracks not in the seven-inch series, “Crippling Poison” and “Birds of Paradise, Birds of Prey” as well as a slightly different A/B flipped sequence for “Crossgates” and “I Breathed In The Smoke Deeply…” If you’ve been following the band in the last few years, it’s no secret this current lineup is the band’s strongest yet. Overall musically the band is focused and really digging into their creativity, which works out because around ‘Death Is The Only Mortal’ it felt like the band was getting a bit repetitive. Here we find them injecting numerous influences including a personal favorite touch of mine, their love of Type O Negative.

Lyrically Vincent has become quite the mastermind of how he controls his delivery of when to provoke a thought or when to be extremely blunt and direct. It is quite obvious that the record’s theme is about plagues and end times; as most previous albums fall, but there’s something about here that makes it that much more masterful presentation wise. Instrumentally speaking for darkened downtuned 8 strings tuned to F, the production sounds very focused, not muddy, very crisp and concise and to be honest I wish more downtuned metal bands would take notes from this recording quality.

I did mention that they’re exploring new avenues as far as song writing and expression, but maybe 2 songs on this sound a bit too familiar to the Acacia Strain formula. Overall it doesn’t really detract from the series considering most seven-inch releases are A side being the single and B side a leftover track, cover or live song, these were all equal components. Listening to the album apart is where the strength really is, while the flow in the ‘Slow Decay’ long form is great, in the seven-inch form the low doses pack decidedly more punch individually, for example songs like “Crossgates” and “Seeing God”. Closing out with “EARTH WILL BECOME DEATH” is a solid growth for the band as it almost grimaces in the face of what it just presented, dare I say ending this series on a happy note?

I know this is starting to sound a bit played out in my recent reviews, but this is another one of those top 5 metal albums of 2020, only difference here is I would say this one is unbudgeable. While it stinks this came out in an era that the band couldn’t really take the opportunity to package up some big tours, this is certainly a release that cements them as an act bigger than they were before. It certainly pushes them beyond any metalcore-Meshuggah detraction.