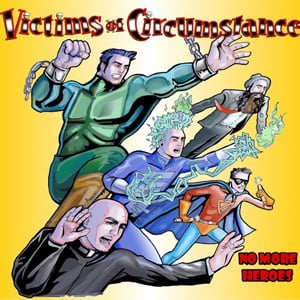 “No More Heroes” is the fourth full length for these ska punkers from Clearwater, Florida. After taking a trip through time with their last release, the cover song EP “Decades”, VoC pick up right where they left off…by putting forth some kick ass ska punk songs for the masses.

I’ve followed the band since receiving their first album to review way back in 2008 and with each and every release they manage to sound better and better…an obvious formula…one that a lot of bands can’t seem to follow. “No More Heroes” is no exception to that formula.

The album kicks off with a punk/Oi sing-a-long track titled “Twenty One”. It’s a historical song that tells the story of one of baseball’s greatest players that wore the number 21, Roberto Clemente. Being a “yinzer” I thought that it was pretty cool to have a band from Florida writing a punk song about one of the Pittsburgh Pirates greatest all-time players. I’ve always enjoyed this aspect of VoC. They have a knack for writing unique songs about historical events like “The Final Flight of D.B. Cooper” and “My Tereza” from their earlier releases.

Following up “Twenty One” is the hypersonic punk with horns track “MPYM” preceded by an array of skankable two-tone tracks, third-wave ska punk and everything ska and punk related in between. Some of my personal favorites were “Katie”, “Arbitor of Bad Taste”, “Strength” and “Ska Punk Girl”. I could see the latter being a closing song and a crowd favorite.

As with most Victims of Circumstance albums, there are plenty of sing-a-long anthems that blend pop sensibilities with punk and ska throughout the course of “No More Heroes”. The band also manages to expand their sound by incorporating some reggae and traditional ska elements. Top that off with some always interesting and thought-provoking, sometimes political, sometimes socially conscious and sometimes humorous songwriting and you have yourself one of the best ska punk albums of the year so far. At this time I may be a fanboy, but the Victims of Circumstance just keep putting out great albums with each release. They were never afraid to wave their ska punk banner proudly and I’m glad because they are damn good at what they do.

Bottom Line: A ska punk album that is well done in just about every aspect. Their sound is unique in their clichéd genre and the best way to describe them would be to mix Mustard Plug with the Mighty Mighty Bosstones and a little bit of Rancid and some Pixies. You can totally picture that amalgamation, right?
Notable Tracks: Twenty One, Arbitor of Bad Taste, Katie, Reggae II, Ska Punk Girl, Strength, To Have and To Hold
Overall Rating:

RIP: Folk legend Pete Seeger has passed away at the age of 94