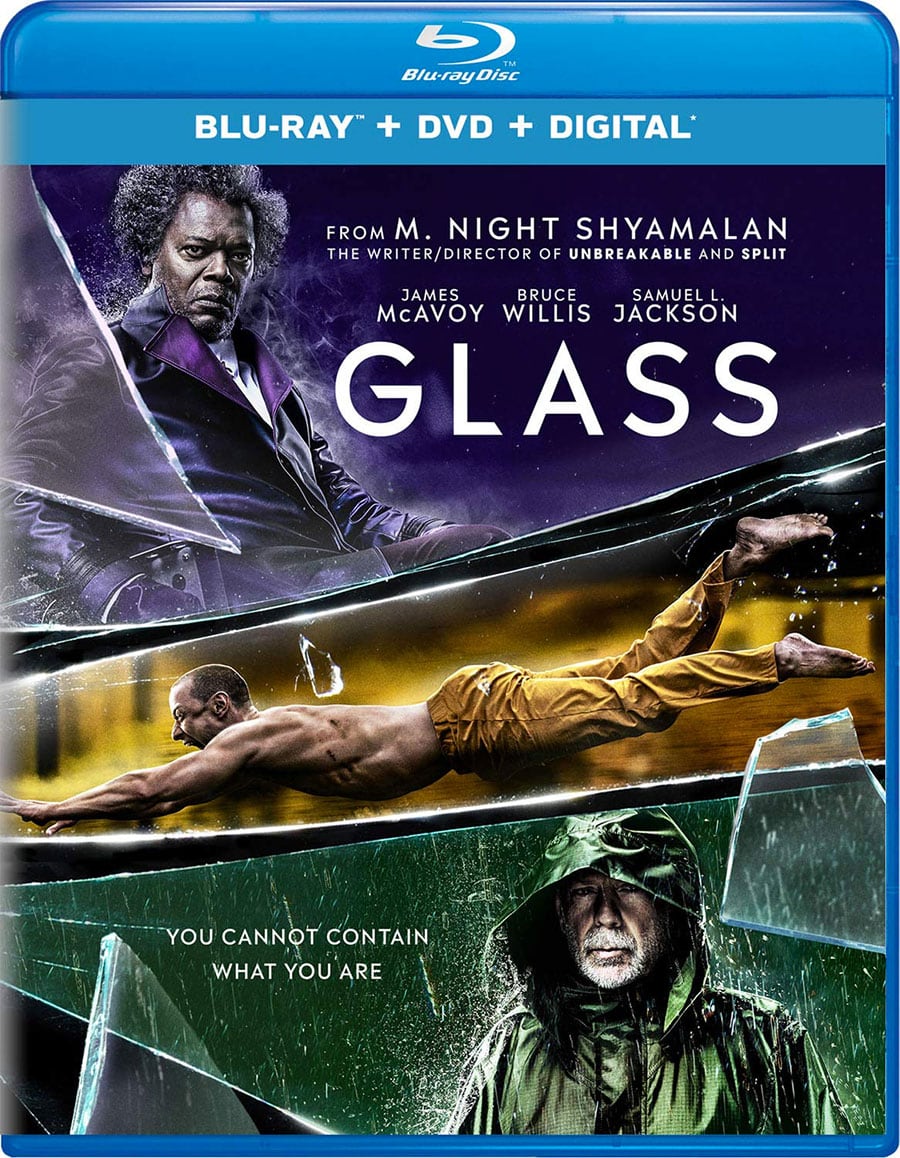 Glass is the third movie in the Unbreakable trilogy (Unbreakable, Split and Glass) and it will probably divide fans on whether or not they like it or not. The movie has some great acting and an interesting storyline but I would have preferred a different outcome.

The movie takes place 3 weeks after the events of Split, in which terrifying psychopath Kevin Wendell Crumb/The Beast (James McAvoy) who has dissociative identity disorder, kidnapped teenage girls. Superhuman vigilante David Dunn (Bruce Willis) begins tracking down kidnapped cheerleaders, which brings him face to face with The Beast. While fighting, they are arrested and taken in by the Philly PD and Dr. Ellie Staple (Sarah Paulson), who activated a machine that flashes a set of hypnotic lights to trigger The Beast to switch identities. They are sent to a Mental Hospital, and examined by Dr. Staple, but they aren’t alone there. Elijah Price / Mr. Glass (Samuel L. Jackson) is there as well, and after that shit hits the fan.

I actually never saw Split until the same day I sat down to watch Glass. James McAvoy was great and creepy as Kevin. The story border-lined on horror for me but was more a thriller than anything. I absolutely loved the ending to that movie, with the Unbreakable music kicking in and then you see David sitting at the diner. Too bad I was spoiled by the ending or else I would have flipped out that the movie was tied with Unbreakable. It was a great transition to Glass though, which I didn’t even know was in development for awhile. I thought Glass started out really good, had an interesting premise and like this superhuman world that M. Night has created but I was pretty letdown by the ending. I probably got why he did it the way he did it, but I wish there was a different outcome. I don’t want to give away spoilers so I’ll just say that about the ending.

The movie feels like a tease because Mr. Glass doesn’t really show up until halfway through. This still felt like a sequel to Split than it did for Unbreakable because McAvoy’s Kevin gets the most screen time. The guy can act, but man I hated him doing the Hedwig character. His voice was just annoying. I loved seeing David Dunn and son working together to hunt down criminals. Why couldn’t we just get another movie of them? I liked parts of the ending, and finding out things about Dr. Staple’s character but I wish some things didn’t happen the way they did. It would be cool to continue on this trend of superhumans like every few movies without telling anyone the premise of them. I loved Unbreakable for that, and it still holds up for being one of M. Night’s best movies.

The Blu-Ray has deleted scenes, alternate opening, and a few other featurettes. The alternate opening was weird and felt out of place, which was just hospital people setting up cameras, water system and all the stuff in the hospital. It just felt like a spoiler before even seeing the movie. The deleted scenes were decent, and just gave us some more depth from each of the characters. All the other featurettes were short but there’s a lot of them to give you enough juicy stuff if that’s what you’re craving. I like seeing featurettes on the stunts, talking with the composer West Dylan Thordson, and the conversation with James McAvoy and M. Night Shyamalan.

This movie has it’s moments, but it spends too much time at the hospital where you want them out there doing stuff. I thought David’s hunt for Kevin should have been harder to find him and that should have been happening more in the first half. Samuel L. Jackson’s talents were wasted for the majority of the movie too. With all that said, I still had a great time watching this despite not liking what happens in the end. I would be open to seeing more movies in this superhuman world though, especially knowing more about the group that Dr. Staple was apart of.

Features:
Alternate Opening
Deleted Scenes
The Collection of Main Characters
A Conversation with James McAvoy and M. Night Shyamalan
Brining the Team Back Together
David Dunn vs. The Beast
Glass Decoded
Breaking Glass: The Stunts
Connecting the Glass Universe
M. Night Shyamalan: Behind the Lens
The Sound of Glass
Enhancing the Spectacle
Raven Hill Memorial