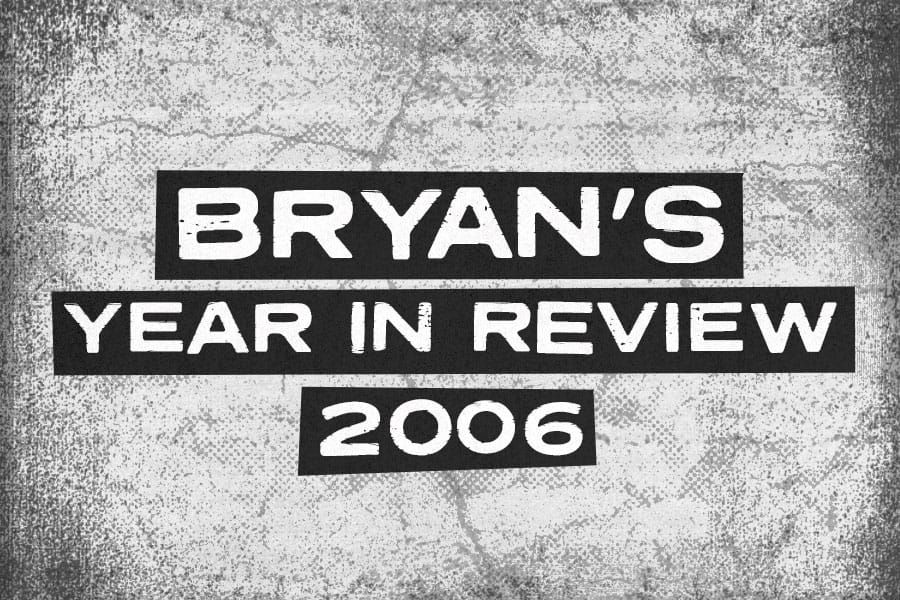 2006 is coming to an end, and it’s time for one of those typical list you see on every website and magazine. So without further ado, my stupid list of 2006.

Tom Waits- “Orphans: Brawlers, Bawlers and Bastards”
We don’t get an album from Tom Waits in over 2 years. Then he comes out with his brilliant gem. A must-have for Waits fans!

DeVotchka- “Curse Your Little Heart”
Besides Tom Waits, DeVotchka is another band I discovered this year. Well not personally, but a band I found out about. They are truly a unique and wonderful band. This EP makes me want to hear a new full-length ASAP!

Anti-Flag- “For Blood and Empire”
“Press Corpse” is one of their catchiest tunes ever. The rest of the album is rockin’ as well.

The Decemberists- “The Crane Wife”
Although their fans are a bunch of pussies, The Decemberists wrote one hell of a great album. This album didn’t leave my cd player for at least 2 months.

Ignite- “Our Darkest Days”
This album blew me away! No, not that way jerks. It was hard to top “A Place Called Home” but Ignite did it.

Greenland Whalefishers- “Down And Out”
Norway’s Pogues released a great album that’s just as good as “Loboville.” Check out the song “Punk Shanty.”

Korpiklaani “Tales Along This Road”
Finnish Forest Folk Metal! This music makes me want to grab women by the hair, pour mead down their chests, and lick it off. But enough about my fantasies…

The Kooks- “Inside In Inside Out”
This band came out of no where. Once I heard “She Moves In Her Own Way,” I was hooked. Great UK campfire rock.

Previously released albums that I couldn’t stop playing this year:

Most anticipated albums of 2007

Top 7 movies of the year:

I haven’t really been to the movies this year; I can’t even find 10 films to pick that I saw. Maybe if the movie industry lowered the price of showings, and got rid of the assholes talking behind me the entire movie. Then maybe I’ll go to the movies more. But here’s my Top 7 movies I liked this year.

Pirates of the Caribbean 2: Dead Men’s Chest
Just as entertaining as the first flick. Now bring on the third film! “So what’s become of my ship!?” AHHH!!

The Illusionist
Just watched this one the other day. It was shot beautifully, the acting was great and the story was interesting!

Borat
One of the funniest movies…ever! “VERY NICE!”

Casino Royale
I was kind of worried Daniel Craig would suck as Bond but he was totally bad ass! The film was put together well. And Eva Green’s breasts were lovely to watch as well. Bouncy Bouncy!

Little Miss Sunshine
The movie is a little depressing but the last half hour makes up for everything. Great acting, direction and an awesome soundtrack to boot.

Inside Man
Clive Owen is awesome, and bank heist movies are even awesomer! Is that a word? Who cares, this is my site; I’ll do what I want.

V For Vendetta
This movie is punk rock.

Boring films of the year:

Miami Vice
I tried watching the first half hour on the plane back from the UK and had no idea what was going on with this movie. I was so bored that I turned it off.

Sunshine
I saw an advanced screening of this Danny Boyle directed sci-fi movie and wished I never saw it. I’d rather stare at a blank wall for an hour and a half.

Talladega Nights
Nascar is boring. Movies about Nascar are equally boring. So this was a boring Nascar movie.

Nacho Libre
School of Rock and King Kong were flukes. Jack Black is back to be annoying and sucky at the same time.

Disappointing movie of the year:

A movie that’s better the second time around:

Best DVDs of the year: