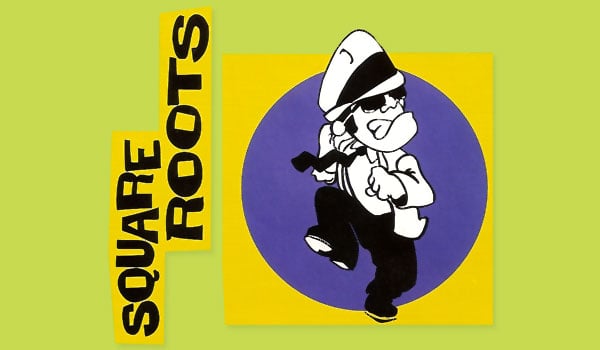 I figured I’d start a feature where I briefly talk about a band and post some videos of them. It will usually be about a band we haven’t heard from in awhile or haven’t listened to for awhile. The band featured in this article is the ska band Square Roots from Santa Cruz, California. Remember them!?

I never saw Square Roots live since they broke up around 1995 and I only really have one album by them. It’s their self-titled album from 1994 via Beach Records; I’m pretty sure it’s out of print even though you can get it on Amazon.com for a bazillion dollars. They had another EP out called Snacks which features the song “Sod Off,” which you might have heard in Moon Record’s popular ska compilation series Spawn of Skarmageddon series.

Billy Petrone was the frontman and was also the drummer at times as well. After the band broke up, Billy and some other local ska musicians formed the band Monkey Man that didn’t last too long. I first heard of Square Roots through my older brother and his friends, and it was this extremely weird song “Program Zero.” The music was catchy and the lyrics were…just pure gibberish! This is my kind of band! When I started to listen to ska music in early ’96, they were one of the first I listened to.

After hearing that song, I think I got their whole album and have some gems on it like “Make It Home,” “Waiting for the Ships” and “Premonition.”

Like I said above, “Sod Off” was on the Moon comp. Spwan of Skarmageddon and one of the better songs by Square Roots:

Here’s some rare concert footage that I found of Square Roots on YouTube:

A promo video done for the band, and enjoy that old looking Mac footage haha

The band was quirky and fun, and not sure why they dissolved. Thankfully some people uploaded some videos and music to the internet for all to enjoy. I’m not sure if they ever reunited or not but with the ever-growing number of bands returning to the ska scene, I’d love it for these guys to make a comeback.