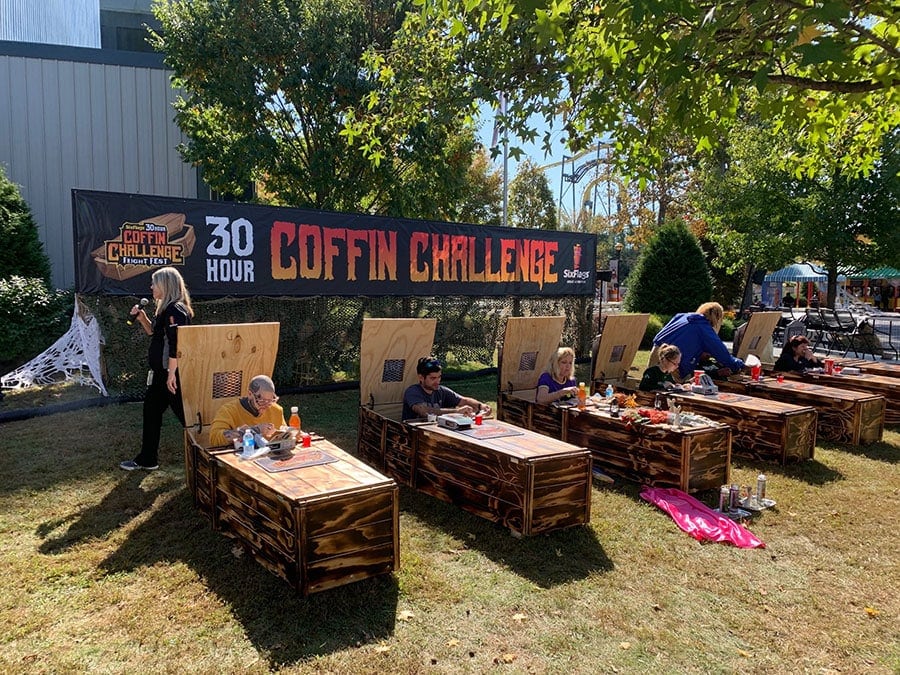 Six people apparently couldn’t wait until the inevitable future date to get acquainted with the inside of a casket.

The challenge was “simple”: Spend 30 hours in a coffin, with only occasional breaks for food and bathrooms, with the ultimate prize being $600, a small replica of the coffin, as well as a pair of season passes to Six Flags Great Adventure in Jackson, New Jersey, which hosted the event this week. It’s all a part of the annual Fright Fest, which brings the scare-minded and the curious to this Jersey amusement park. (The event is replicated at other Six Flags parks around the country.)

“I love Halloween. I love everything spooky,” contestant Amanda Roberts of Hopatcong, New Jersey, told me while “relaxing” in her erstwhile dwelling. Roberts enjoys body modification and roller derby, so spending 30 hours in a coffin seemed like a no-brainer, she said.

“I think it’s kind of an absurd thing, and it’s just fun and in the spirit of Fright Fest and the season,” Roberts said. “It’s like a feat of strength but also this awesome story to have. It’s going to be something you tell your kids down the line.” 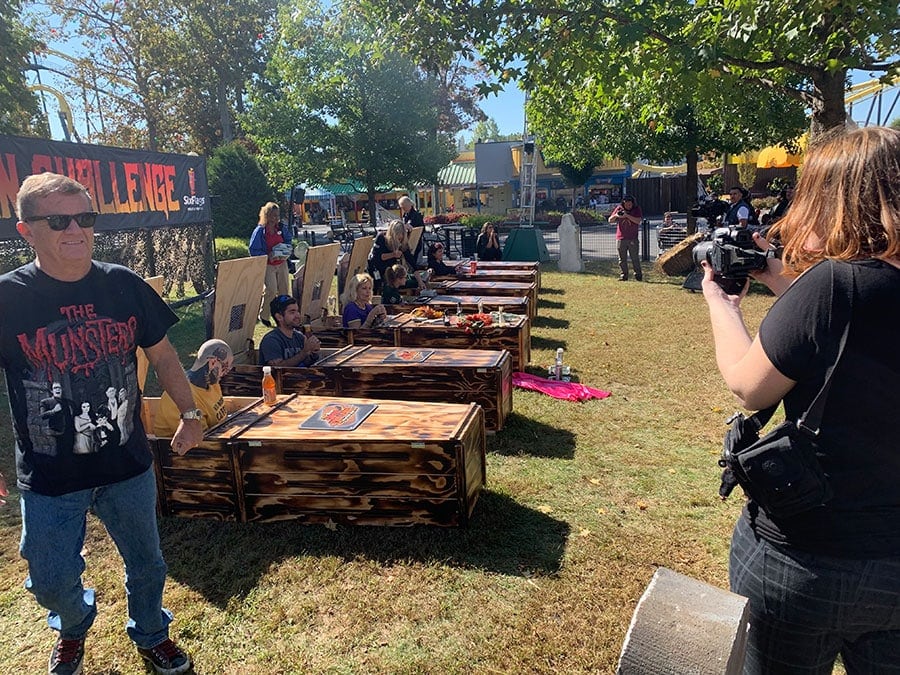 If the aspirants left the coffins for any reason at any time other than for the programmed breaks, they were out. Roberts and her fellow contestants were by the time of interviews nearing hour 24 of the challenge and beginning to show some signs of wear. Staying in a “comfortable” position proved nigh on impossible, and at various points the contest’s overseers even took away such menial comforts as pillows.

“I would say I thought the sleeping bag would make it a little bit more comfortable, but not so much,” said paramedic Mike Markawicz of Ridley Park, Pennsylvania, who lazed in the casket next to Roberts’. 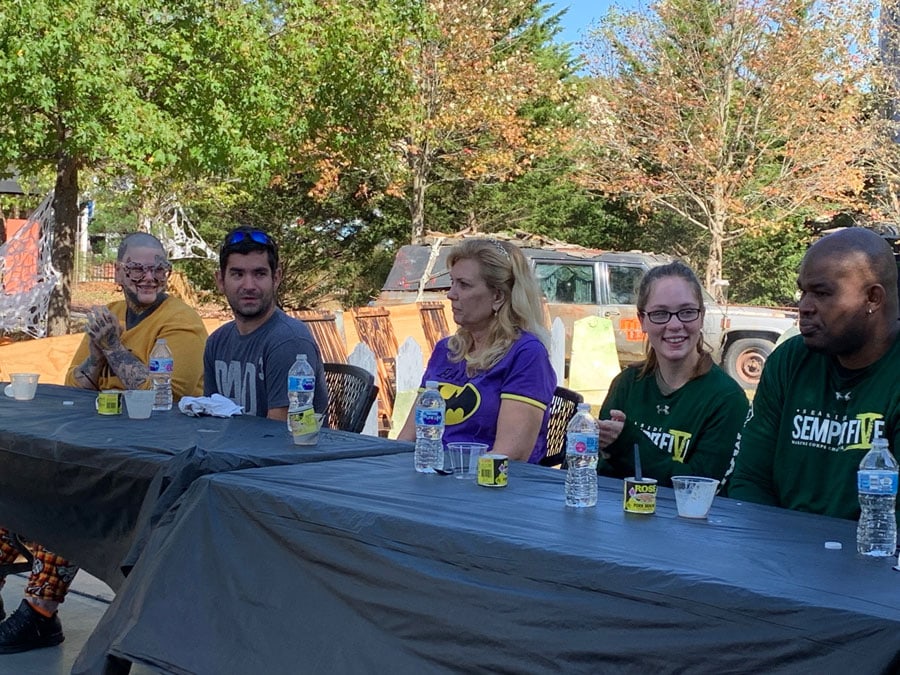 Markawicz may have had the most surreal experience of death not only of the contestants, but possibly ever. He told me that when he was young, his great-grandfather’s body literally sat up inside the casket at his wake. Everyone was forced to leave the room while the decedent was “reset.”

“I don’t know how they got the body back down,” Markawicz said, though he didn’t mention if this mysterious event was ever explained away.

Markawicz and Roberts were selected from among 6,000 applicants for the Coffin Challenge. The contestants’ motivations for the claustrophobic exercise ranged from conquering a fear of death to, of course, wanting those 2020 Six Flags season passes. 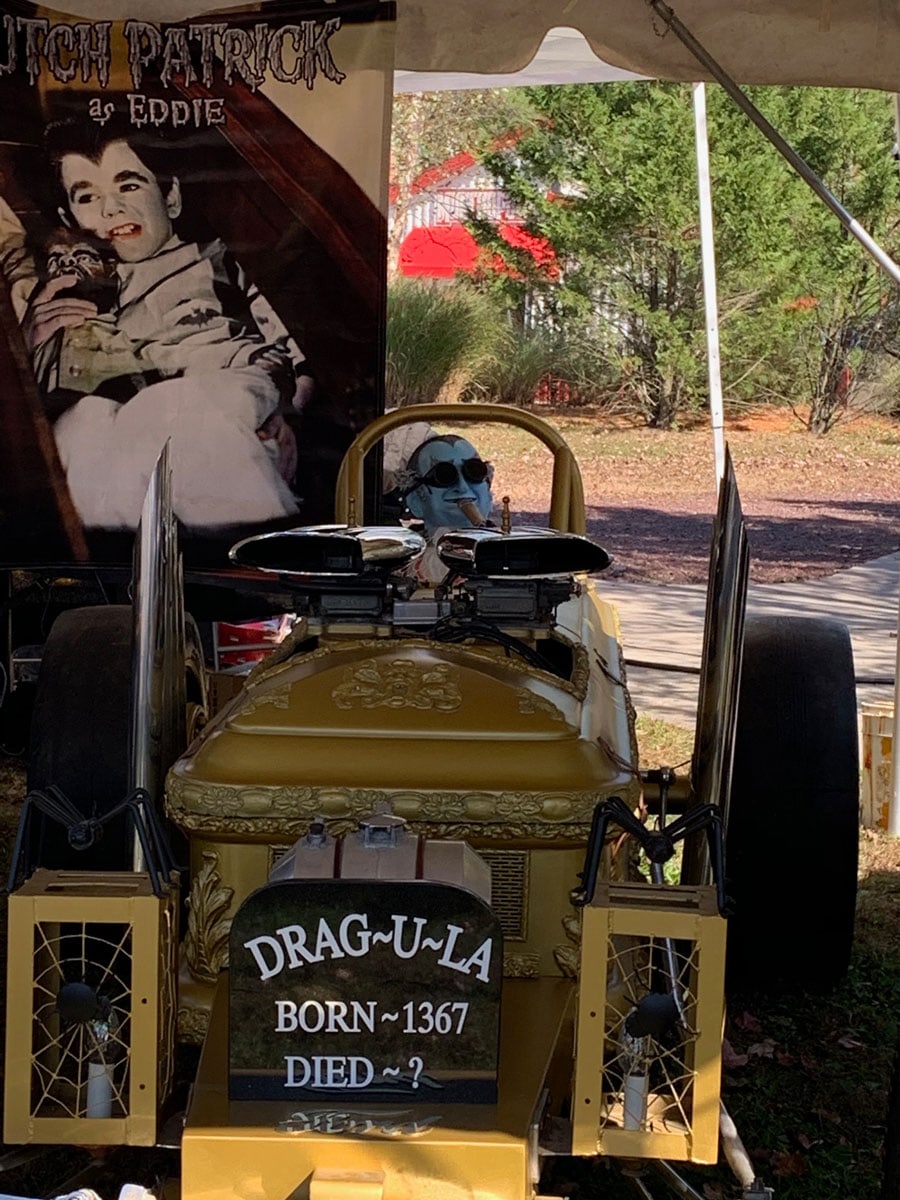 However, it’s not simply lying in a pine box for 30 hours. During the overnight hours, the contestants were refused sleep thanks to costumed ghouls pounding on their ersatz homes. “Baby Shark” was played on a continuous loop over loudspeakers in constant torment.

And time outside the coffins was certainly no “picnic” either, as contestants earned points for enduring such ignominious tasks as dining on pig brains in a can (yes, you can buy them in the shop, apparently) and downing other such awfulness. Points were detracted if a contestant refused and/or their digestive system summarily dismissed the grotesque snacks.

Contestant Deborah “Cricket” Alanis of Bayshore, New York, used to be a funeral director, but now found herself at the business end of her former profession.

“I’ve never crawled into a coffin before. Usually I’m putting somebody else into one,” said Alanis, who has also survived a bout with cancer.

Nearby, Kerri Platt of Forked River, New Jersey, said she wanted to prove to her teenage children that she had the stuff to “survive” more than a full day in the coffin, but added that one of the unexpected problems was getting into a sitting position for the infrequent breaks.

“Sitting up I’m like ‘ow!’” said Platt, who herself nearly died in childbirth. “I’m older than I thought.”

But the prize for cuteness-in-a-coffin must go to the father-daughter tag team of John Nash and Alairra Craven of Seaside Heights, New Jersey. Nash is an Army Ranger, which requires no small amount of specialized training to endure the harshest of conditions. His daughter Craven, 18, following in her dad’s footsteps, recently graduated from Army basic training. 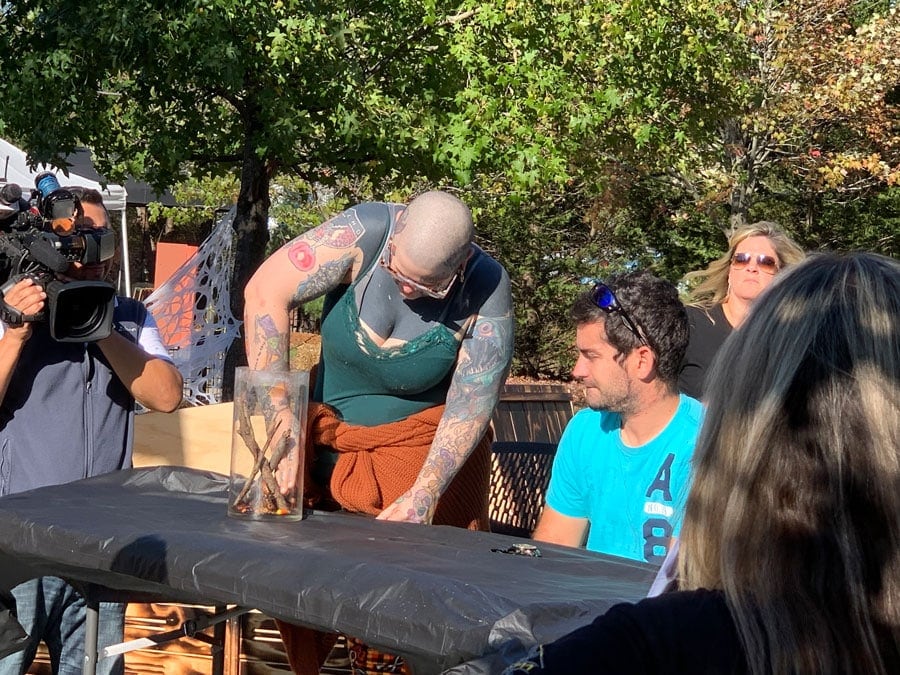 “We do a lot of stuff together,” Craven said from inside her temporary quarters. “In basic training I did some wild things, but I never had to drink clam juice mixed with hot sauce. But I’m kind of used to” such challenges, she said.

“We like to compete and I saw an opportunity for a good bonding experience,” said Nash, Craven’s pop.

When asked if the Coffin Challenge was more difficult than anything he’d experienced in the extremely tough world of being an Army Ranger, Nash replied, “Not at all. But it ranks up there in the suckiness part.”

The contestants were allowed to sit up for a quick snack, but then it was back to the insides of their caskets—this time with the lids closed!

An hour later, they were roused to eat the pig’s brains in a can. Roberts, the tattooed Halloween fanatic, was game, as was Nash, the Army Ranger. (Seated next to him, his daughter Craven passed.) Nash scooped the pig’s brains stew into his mouth and, like a good sport, drank the liquid in which the organ sat. He kept it down, and soon enough he and his fellow contestants returned to their “bunks.”

Celebrity guest MC Butch Patrick, aka Eddie Munster, flew up from him home in Florida for the Coffin Challenge. Patrick brought both the Munsters Koach and Family Hearse along for the ride. The two pop culture vehicles sat underneath a tent, with a mockup dummy of Grandpa Munster seated at the wheel, next to a photo of a much-younger Patrick in his “Munsters” days.

“Come to the park, ride rides and see the cars. How could I say no?” Patrick said during a break in the action.

Patrick has made the rounds of conventions for years, gleefully signing autographs and taking pics with fans. He said that fans have come to him asking him to “sign” Munsters tattoos on their bodies, with the notion the signature too will be inked onto their skin later.

“I think that’s about the weirdest,” Patrick said of all the memorabilia he has ever been asked to sign.

At the end of 30 hours, with points tallied, Halloween fanatic and body modification enthusiast Amanda Roberts was declared the winner. In addition to gamefully dining on the pork brains, she had to reach inside a mason jar of cockroaches to grab candy corns as well as endure visits from tarantulas, a boa constrictor and a skunk. Roberts was awarded the promised $600 in cash, a pair of 2020 Gold Season Passes, Haunted Maze Express Passes and a small replica
of her full-size coffin.

All in a day’s work for these Halloween fans.