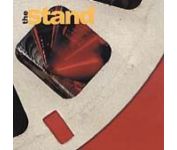 Why the name change? Are you Stephen King fans?
We knew the name Racecar was trademarked for a long time, so we bounced around ideas until we arrived at The Stand. Sorry Mr. King, it was actually a shortened version of the Standards.

Your sound is more rock/soul/mod than ska. Do you feel more of an affinity with the ska scene or the mod/scooter scene?
The music that we’re really into fits well with both scenes. We certainly try not to be exclusive to only a small scene or sub-scene. A lot of the same people around Chicago that dig the old ska music also like the mod/rock stuff too.

There’s definitely a Motown influence on the album. What does the band listen to for inspiration?
We come from many different musical directions, the soul influence would be the old Stax/Motown stuff…Wilson Pickett, Otis Redding, etc. but the rock comes from Stones/Who/Elvis Costello stuff.

Because of the Chicago-soul-ska-boy/girl singers thing, you must be getting a lot of comparisons to the Adjusters. Do comparisons to other bands drive you nuts?
The problem seems to be that we change our sound so often and really play so many kinds of music. One day we might have a strong soul vibe going and the next song we might sound like the Replacements, for example. We just try to write the kind of music we would like to hear.

What would you like to see change in the mod/ska/soul scenes?
It would be great to see more bands doing their own thing inside a particular scene. A lot of bands seem to be so caught up in a particular scene that the music seems compromised at times. We love the idea of a tight grass-roots following of people with the same general tastes but it would pretty shallow to love the Who and not pay any attention to the Delta Blues music that influenced the rock n’ roll of the 60’s.

Is Northern Soul a real thing, or something a music snob made up to bewilder everyone else?
The idea with Northern isn’t necessarily a sound but often an attitude. If you don’t think it’s real today, just spin an Inciters record.

If The Stand were a beverage, what would you taste like?
Like one of Chuck Wren’s Bloody Marys; you don’t really know what you’re tasting, but you know it’ll burn your stomach.