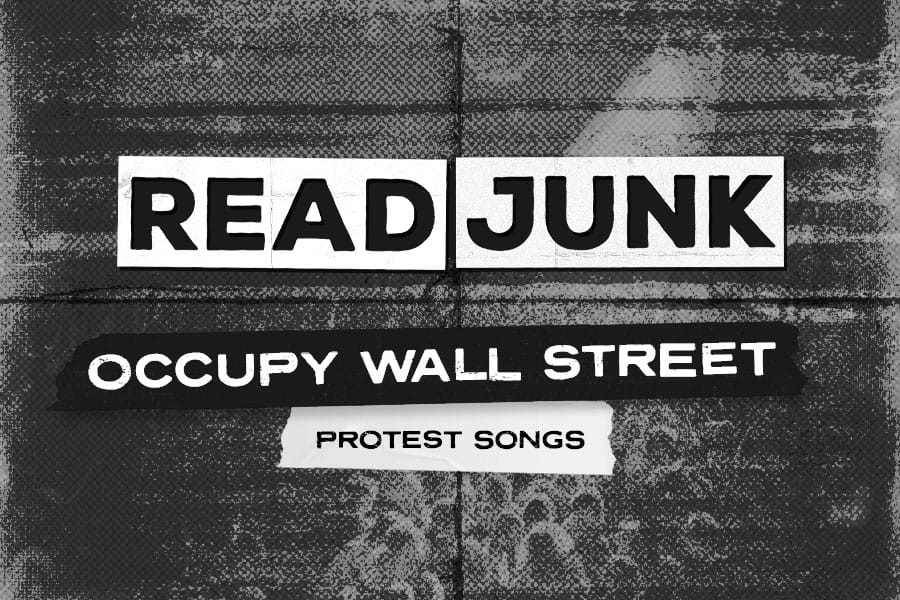 Occupy Wall Street is happening across the country right now, spreading throughout city to state. The Occupy movement is going to other countries as well. People are fed up and downright pissed off about corporate greed and the way the world is being run. I wanted to gather up a bunch of protest, revolution, riot, anti-police, anti-government, anti-banks, etc. type of songs for a protest playlist. In the past my playlists were just articles, now you can listen to them on Spotify!

Not every song on the list is about protesting per say; plus I’m sure I forgot a bunch of songs but wanted to have the songs be somewhat relatable to what is going on right now with Occupy Wall Street. Check out the list below. Be sure to add to the list in the comments section and I’ll have them to the Spotify playlist.

Listen to my Protest Playlist on Spotify: http://open.spotify.com/user/readjunk/playlist/3YHmudkrQVAXXI2WMsXjWx

2. The Clash – “Know Your Rights”
The Clash have so many songs relatable to the protests. “Clampdown,” “Police on my Back,” and many others.

3. Authority Zero – “Revolution”
Listen to this song and I’ll guarantee you’ll be pumped up!

5. Billy Bragg – “Waiting for the Great Leap Forward”
“Start your own revolution and cut out the middle man”

6. Bob Dylan – “The Times They Are A Changin’”
The times are changing, whether people want to recognize this protest movement as a serious one or not.

8. Steve Earle – “Revolution Starts Now…”
Could very well be the theme song to the Occupy protests

10. Michael Franti and Spearhead – “Yell Fire”
See Franti perform down at the protests in NYC here.

11. Dead Kennedys – “Stars And Stripes Of Corruption”
Lots of perfect songs to choose from. The cover of “I Fought The Law,” or the cover of “Take This Job and Shove It,” or this.

12. Anti-Flag – “You Can Kill The Protester, But You Can’t Kill The Protest”
Anti-Flag have played the protest already and pretty much have an entire catalogue that could be used in a playlist like this.

13. Saul Williams – “The Pledge of Resistance”
“We believe that as people living in the United States it is our responsibility to resist the injustices done by our government.”

14. Gil Scott-Heron – “The Revolution Will Not Be Televised”
A pretty obvious choice.

16. Big D and The Kids Table – “It’s Raining Zombies on Wall Streets”
They sing about eating Rush Limbaugh when they are zombies. Gotta laugh at that.

17. Jarvis Cocker – “Running the World”
Never heard this song before but it’s a great tune from the former Pulp frontman. You can find this track at the very end of “Quantum Theory.”

18. New Model Army – “Today is a Good Day”
A song about the stock market crashing.

19. Bruce Springsteen – “How Can A Poor Man Stand Such Times And Live”
Gotta have some Bruce on here.

21. Filthy Thieving Bastards – “A Killing on Wall Street”
“Now is the time, to give a shit…”

23. Aus Rotten – “They Ignore Peaceful Protest”
Just one of many from the political punk band Aus Rotten.

24. Bad Religion – “You Are The Government”
You can make a difference!

25. Agnostic Front – “Police State”
This song was released back when Rudy was still Mayor of NYC. As you might have guessed, this song still relates to what’s going on today.

26. Barry McGuire – “Eve of Destruction”
Quite the rowdy song for it’s time.

27. The Beatles – “Revolution”
Can’t have a protest/revolution playlist without this Beatles song on it.

31. Morning Glory – “The Whole World’s Watching”
You might hear this being chanted at protests, especially when the cops are doing something they shouldn’t.

32. Citizen Fish – “How To Write Ultimate Protest Songs”
Good tips on how to write a protest song.

33. Against All Authority – “Policeman”
AAA have gotten their fair share of mix-ups with the police

36. Boogie Down Productions – “Who Protects Us From You?”
BDP are one of my favorite hip hop groups besides Public Enemy. Another anti-police song.

37. Exploited – “Law For The Rich”
A timeless song about the rich.

39. The Unseen – “Children of the Revolution”
“…And the people will rise up, and resist!”

40. NOFX – “We Called It, America”
Sums up what happens to America nicely.

42. The Toasters – “Don’t Let The Bastards Grind You Down”
Down with The Man!

43. The Specials – “Stand Up”
“Stand up for what you want, stand up for all your needs”

46. Minutemen – “Fascist”
A song about fascists. You’d think it would be about fluffy clouds?

48. Green Day – “Minority”
Catchy rebel song from Green Day. I’m sure you can pick a few from their discography as well.

49. Iggy Pop and the Stooges – “Corruption”
“Everything leads to corruption”

50. Phil Ochs – “I Ain’t Marching Anymore”
A famous anti-war song. Part of the problem with the US is the constant wars that we shouldn’t be in anymore.

51. Patti Smith – “People Have The Power”
“The power to dream, to rule, to wrestle the world from fools”

52. Tom Petty – “I Won’t Back Down”
I doubt any of those protesters are going to back down from the brutality and stop protesting.

53. The Doobie Brothers – “Takin’ It To The Streets”
See, even Michael McDonald is telling people to take it to the streets.

54. The Casualties – “Tomorrow Belongs To Us”
Basically saying time to wake up and realize the world isn’t okay.

55. The Tossers- “Riot Riot”
I think the Tossers want you to riot.

56. Ten Foot Pole – “Wake Up and Smell the Fascism”
“Wanna change the world WAKE UP, Wanna make a difference WAKE UP”

58. Snapcase- “Believe, Revolt”
Simple. Believe in the message and then revolt.

60. Bad Brains – “The Regulator”
Regulated by the Man…man.

61. Dennis Brown – “Revolution”
“Are you ready to stand up and fight the right revolution?”

63. The Thermals – “Power Doesn’t Run on Nothing”
“They’ll give us what we’re asking for, cause god is with us, and our god’s the richest”

71. R.E.M. – “Welcome to the Occupation”
A fitting song for the Occupy movement.

72. Chaos UK – “Wall Street Crash”
Ah, to be rich and then have it all taken away. How does it feel?

77. Earth Crisis – “Mass Arrest”
Let’s try not to have any more mass arrests.

78. Have Nots – “There’s Gonna Be A Riot”
Haven’t seen a full-fledged riot yet but think we will sooner or later somewhere.

79. Angelic Upstarts – “Police Oppression”
What a fitting title of a song. Should be played at the park, dedicated to the NYPD.

82. Face to Face – “No Authority”
I take it punk bands don’t like authority?

88. Junior Murvin – “Police and Thieves”
More like police in the streets, fighting a bunch of peaceful protesters.

89. The Skatalites – “Wall Street Shuffle”
An instrumental ska tune to break up all this singing…

91. Pete Seeger – “Talking Union”
Pete has been playing protest folk songs for so long, it would be a shame for him to not be on this playlist at all.

93. Neil Innes – “Protest Song”
Gotta include a funny protest song on this list.

95. Planet Smashers – “A Revolution Song”
We have been calm, but not anymore.

96. The Mad Caddies – “Riot”
“Greed of the nations will burn to the ground again”

97. The Vibrators – “Rip Up The City”
Self explanatory.

104. Madball – “Revolt”
If you haven’t sensed the theme of this playlist, you’re clueless haha.

105. Ignite – “Fear Is Our Tradition”
Ignite have plenty of political songs. Just go to one of their shows to see what I mean (well when Zoli isn’t singing in Pennywise).

107. Suicide Machines – “Invisible Government”
“Do you know the world is run by big corporations, don’t be a fool don’t take a part in the ignorance, that’s sweeping the nation don’t let rich men make the rules will you.”

109. Suicidal Tendencies – “Fascist Pig”
This must be the police department’s anthem?

110. System of a Down – “Fuck The System”
Song is beyond annoying but I guess it sound be on here.

111. World/Inferno Friendship Society – “Only Anarchists Are Pretty”
Can’t Anarchists be in love too?

112. Billy Joel – “Allentown”
Hey, you remember when things were made in America and weren’t outsourced?

114. Sam Cooke – “A Change is Gonna Come”
Well maybe not from Obama, but from the people!

115. Tom Waits – “Day After Tomorrow”
Sorry to end this playlist on such a downer.

Listen to my Protest Playlist on Spotify: http://open.spotify.com/user/readjunk/playlist/3YHmudkrQVAXXI2WMsXjWx

Walls Of Jericho – “The American Dream”