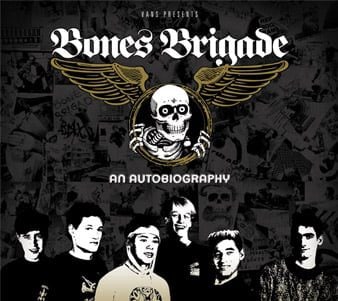 More and more documentaries are coming out and a lot of them look great! Bones Brigade: An Autobiography looks like an awesome skating documentary featuring Tony Hawk, Steve Caballero, Lance Mountain, Mike McGill, Rodney Mullen, Tommy Guerrero and Stacy Peralta. This was also filmed by Stacy Peralta. I never really skated before but always like these group of guys so I’ll definitely want to see this soon. Watch the trailer and more below:


Filmmaker Stacy Peralta today announces the worldwide premiere of the trailer for his new critically-acclaimed film, BONES BRIGADE: AN AUTOBIOGRAPHY and a free download of the most successful skateboard video of all time, THE SEARCH FOR ANIMAL CHIN.

“We are very excited because we’re releasing Bones Brigade: An Autobiography primarily by ourselves, in a new and modern way,” says Stacy Peralta, the film’s director and mentor of the original Bones Brigade. “The only place to fully experience the film will be through our Bones Brigade web site; where myself, Tony Hawk, Steve Caballero, Lance Mountain, Mike McGill, Rodney Mullen and Tommy Guerrero will interact directly with fans. The trailer premiere, new site and free download is our way of including fans right from the start in the process of releasing the film. I hope they have fun and share it with everyone who loves skateboarding, its history and the Bones Brigade.”

In addition to downloading The Search For Animal Chin for free to celebrate the film’s 25th Anniversary, fans are also invited to email the filmmakers and request a screening in their town prior to the film’s official release. Fans should send their emails to [email protected] by Aug 23, 2012. Here are the detailed screening request instructions, straight from Paul:

“In the subject write BB screening. Include the name of your city, how many skaters are in your area, the names of your city’s skateshops, what theater should screen it, why choose your city and any other useful info that will help us in our planning. The more you send us, the better. We’re also working with our distributors throughout the world and will reach out to you who live overseas for those countries if we need any assistance.”

Official theatrical and DVD release dates for the film are forthcoming and will be posted soon on www.bonesbrigade.com. BONES BRIGADE: AN AUTOBIOGRAPHY premiered to standing ovations at the 2012 Sundance Film Festival.