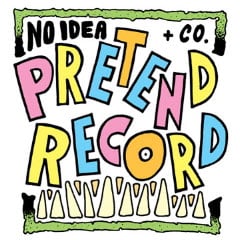 In a practically unfathomable maneuver of selfless generosity and technological wizardry, the No Idea Distro has launched the first in a series of downloadable compilations called the Pretend Record Series. The compilation was launched at approximately 5:07 PM on Friday, June 5, with word spreading faster than a cheetah fleeing from a blazing Kentucky wildfire. By 5:23 PM, the onslaught of bandwidth traffic on the No Idea server forced the entire office to abandon futile attempts at answering emails and proceed directly to Common Grounds’ 2-4-1 Happy Hour.

The compilation features a smorgasbord-sized sampling of new titles distributed proudly and exclusively by the No Idea Distro. Pretend Record features tracks from forthcoming No Idea Records releases such as Dear Landlord’s Dream Homes, No Friends’ S/T, and Speed Is Everything by The Bomb (who count former Naked Raygun singer Jeff Pezzati amongst their ranks), not to mention a handful of formerly vinyl-exclusive tracks from the likes of North Lincoln, Ringers, and Averkiou. The 15-song compilation is rounded out by close friends and closer fiends in the form of Dead Friends, Wormburner, Paul Baribeau & Ginger Alford, Screaming Females, and more, all of whom have piping hot new releases in consumable form available from the No Idea Conglomerate Corporation Empire.

“Welcome back to Volume One of our SUMMERTIME WATER MOSH festival of DOWNLOAD MADNESS!! Limited edition and first-come, first served (shoes and shirt optional)… Nothing to trade, nothing to sell, in fact it’s all a big PRETEND RECORD!! You can’t watch it spin, you can’t hand number it, you can’t auction it. “Well, heck, what CAN you do with it?” You may LISTEN to it. With your ear bones!”

The compilation can be found here.