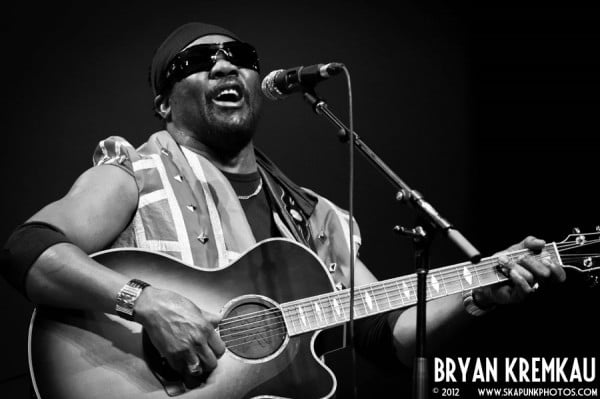 Toots and the Maytals played a festival in Richmond, VA on Saturday night and some drunken asshat threw a glass Vodka bottle at Toots Hibbert. Toots had to go to the hospital and get a bunch of stitches in his head. The drunken fool was arrested for aggravated assault. Toots and the Maytals pressed on the next day and played in Westhampton, NY last night. Thankfully Toots wasn’t hurt further from this incident but ouch, 7 stitches still hurts!

RICHMOND, Va. (WTVR) — An arrest has been made after “Toots” Hibbert was injured during a Toots & the Maytals concert at Dominion Riverrock festival Saturday night on Brown’s Island in downtown Richmond.
William C. Lewis,19, of Henrico was charged with aggravated assault after Hibbet was hit by a bottle thrown on to the stage, Richmond Police said.
[WTVR]

Toots would like to thank all his friends, fans and family who have reached out to him since the bottle throwing incident in Richmond Saturday Night. After 7 seven stitches and a little rest he was able to perform a wonderful show in Westhampton NY tonite as the 1st show of his acoustic tour. The youth who threw the bottle for no apparent reason is in custody and being charged. Being the soldier he is he will hopefully be able to continue the tour. Check tootsandthemaytals.com for upcoming dates.
BLESS