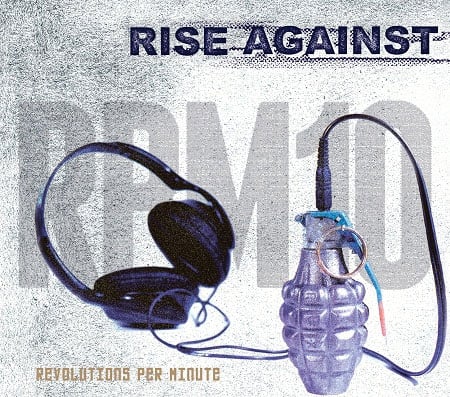 Revolutions Per Minute is still one of my favorite Rise Against albums. Fat Wreck Chords and Rise Against are reissuing the album for their 10th anniversary. The reissue will be out on May 28th and will feature 10 bonus tracks if demos and expanded packaging, whatever that means.

Chicago’s Rise Against are celebrating the 10th anniversary of their breakthrough album,Revolutions Per Minute, with a reissue out May 28th via Fat Wreck Chords. This edition of Revolutions Per Minute (now dubbed RPM 10) features 10 bonus tracks of demos along with the originally recorded album and expanded packaging. Recorded at the Blasting Room and produced by Jason Livermore and the renowned Bill Stevenson of the Descendents, this quintessential album shaped Rise Against’s sound with elements of hardcore, punk, and ripples of emo that cascade into what we know of the band today.
.
Joe Principe, known to Fat Wreck Chords from his previous band 88 Fingers Louie, approached Fat Mike to sign Rise Against back in 2000. Though their first album, The Unraveling, wasn’t completely written, Fatty loved what he heard and signed them immediately. On their sophomore release, Principe recounts, “I’ll never forget sitting in our van talking to Fat Mike on the phone after he listened to the RPM demos. He was so stoked on the songs and the progression of the band, which gave us a real sense of accomplishment. Since half of The Unraveling was written before Rise Against existed, it made RPM the first record we wrote as a full band.”

Principe, vocalist Tim McIlrath, guitarist Todd Mohney and drummer Brandon Barnes headed to the Blasting Room in 2002, armed with their new material. “We wrote these songs above an antique store in Chicago where the owner would rent roach-infested rooms to bands… In a post 9-11 fervor, the powers that be had just finished lying to the public and swindled their way into entering what would become the longest war in our country’s history (which seeped into songs like “Blood Red, White & Blue”),” says McIlrath.

The connection with Bill Stevenson, Jason Livermore and their crew was instant. Once the recording process started, everyone involved could sense a tremendous kinetic energy; knowing the result would be monumental. “This was not just another “90’s Punk/Warped-Tour” sort of band. What I heard was the promise of conviction. A sense of real purpose. And, from each fibrillating vocal cord in Tim’s larynx, I heard honesty. This was a band with the desire to know more, and do more. To not sit back and take things at face value. I remember the hair on the back of my neck stood up while I was recording the vocal on the breakdown of “Blood – Red, White & Blue” (the “would ‘God’ bless the sweatshops?” part),” reflects Bill Stevenson. Todd Mohney recalls, “They worked tirelessly to get the best performances out of us and to ensure that the finished product exceeded all expectations.”

Obviously, 10 years later, the results speak for themselves. Revolutions Per Minute still stands out as a hallmark release for Rise Against, Fat Wreck Chords, and the hardcore punk genre in general. RPM 10 is the perfect tip of the cap to such a extraordinary album.