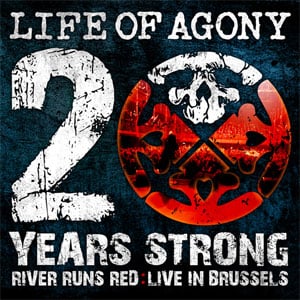 On Saturday April 3rd 2010 I Scream Records recorded & filmed Life Of Agony’s performance at the Ancienne Belgique in Brussels, Belgium, this was the second show of their exclusive European “20 Years Strong” tour. In late 2009 the band performed their debut album “River Runs Red” in its entirety during a few exclusive, sold-out, US shows and, after popular demand, they went over to Europe in April 2010 to perform a set built around this amazing, legendary album.

“20 Years Strong: River Runs Red | Live In Brussels” will be a digipak combo release holding a CD of the entire show as well as a DVD with a 10 camera production of the show, an on-the-road documentary and much more.