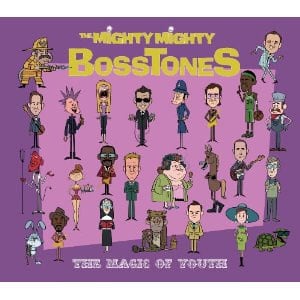 Judging by this song, can’t wait to hear the new Bosstones album “The Magic of Youth”! The new Mighty Mighty BossTones album is set for release on December 6th and the first single “Like a Shotgun” is streaming and available for download now on TheNewRecord.com. The Boston-bred skacore octet have been in business for nearly 25 years and are proud to be still churning out great music. The Magic of Youth is an eleven song album that has everything a BossTones fan could ever want. Ripping sing along choruses, classic ska core beats, vibrant horn lines and of course the raspy heartfelt voice and lyrics of Dicky Barrett.

The writing of the album started shortly after the release of Pin Points and Gin Joints in 2009 and will also be released on the bands own Big Rig Records. Produced by Ted Hutt (the Gaslight Anthem, Dropkick Murphys), The Magic of Youth arrives just in time for the band’s annual Hometown Throwdown which will take place Dec 28-30 at the House of Blues in Boston.

The BossTones recently played two sold out nights at Boston’s Fenway Park with Dropkick Murphys and did a string of shows in Europe including the Redding and Leeds festivals.