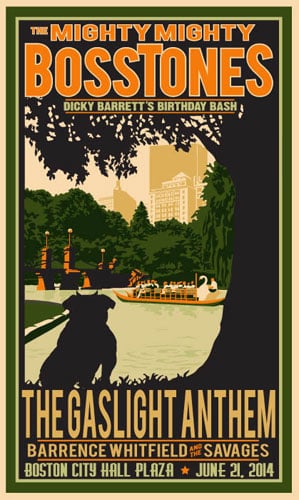 The Mighty Mighty Bosstones have announced a special concert celebrating frontman Dicky Barrett’s 50th birthday. The concert will be on Saturday June 21st (Dicky’s Birthday is on the 22nd) and will be at Boston City Hall Plaza. The Gaslight Anthem and Barrence Whitfield & The Savages will be opening the concert.

If you’re on the Bosstones mailing list, you can get tickets before the general public. The pre-sale starts at 10am EST on Wednesday, April 9th. Tickets go on sale to the general public at noon EST on Friday, April 11th (as part of The Phantom Gourmet BBQ & Music Festival).

There will be a limited number of VIP tickets – including Premium Beer Garden viewing access, VIP BBQ access, and one BBQ dinner are available for $90 per person for guests that are 21 and over.