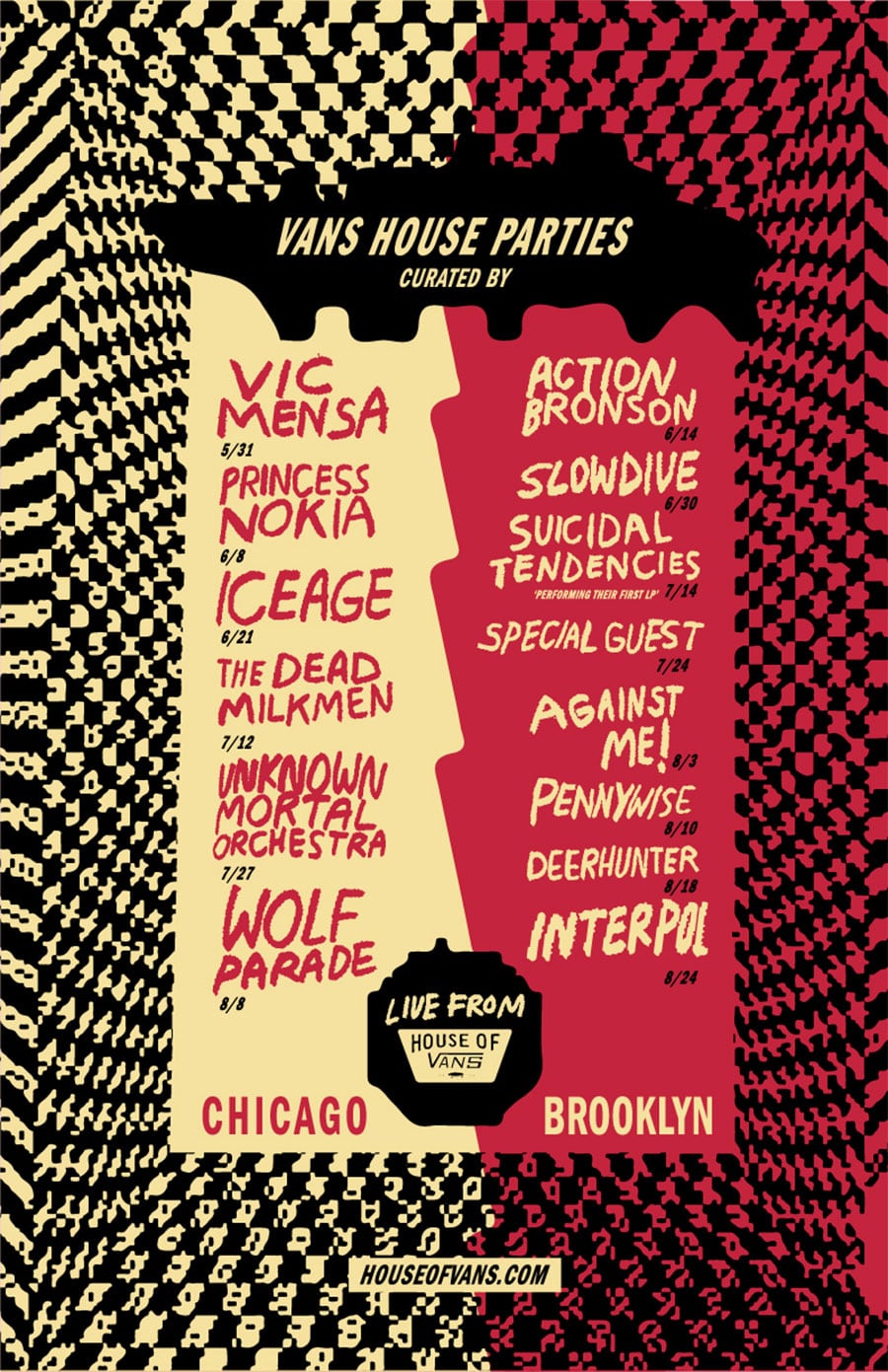 House of Vans have announced a bunch of shows this summer, and it will be the last shows at House of Vans in Brooklyn. Pennywise, Against Me, Suicidal Tendencies, Action Bronson and more have been announced, as long as others. Details is below.

Vans has announced the return of their House Parties series to House of Vans Brooklyn and Chicago. The season kicks off on May 31 in Chicago with hometown rapper Vic Mensa and on June 14 in Brooklyn with Queens’ own Action Bronson. The series will continue with 14 shows from May through August including Iceage, Dead Milkmen, Unknown Mortal Orchestra, Pennywise, Wolf Parade, Deerhunter and more!

This year, the Vans House Parties series evolves where each headlining artist will act as a curator, hand-picking all supporting talent and will be creating a personalized visual art experience for fans. To support and elevate emerging talent, one unsigned musician will be chosen by the headliner to open each Vans House Party show. For the May 31 Chicago show, Vic Mensa has selected local artist, Floyd A. Davis IV to create an immersive, multimedia experience that will combine sculpture and music into a functional speaker wall. Rounding out the bill, San Francisco based hip-hop collective The Pack will take the stage for an epic reunion and unsigned Chicago-based hip-hop artist, KAMI was personally selected by Vic Mensa to open the show. RSVP is open now on www.houseofvans.com.

This year marks the last Summer Series at House of Vans in Brooklyn. When House of Vans opened in the Greenpoint neighborhood of Brooklyn in 2011, it was the first venue of its kind. Designed to be the cultural hub of Vans, House of Vans has been the incubator of creative expression bringing to life Vans’ founding pillars of action sports, art, music and street culture. House of Vans quickly became a staple for the New York community as a place to celebrate culture. In one of the most expensive cities in the world, you could enter House of Vans for free and see intimate live performances by musicians, witness live art installations, and skate alongside leading athletes. What House of Vans Brooklyn achieved set the stage for how Vans would grow and foster creative spaces around the world. There are now permanent House of Vans locations in London and Chicago and pop-up locations around the world, from Canada to Australia.

As Vans continues the House of Vans journey worldwide, Vans remains dedicated to uplifting the local community through music and arts education, even after the doors of House of Vans Brooklyn location close. The brand is proud to announce the ‘Vans Gives A Band Music Fund’, a legacy program that was created to inspire and empower students to embrace their creativity through music. Ten Brooklyn public schools will have a chance to receive $10,000 of music equipment to form one of the following bands: rock band, jazz band or classical ensemble. In addition, each winning school will receive a $10,000 grant to fund their music program. “Vans believes everyone should be empowered to express themselves creatively, but creative outlets are not always accessible,” says Brooke Burt, Vans Senior Manager of Lifestyle Marketing. “House of Vans opened its doors to give people the opportunity to showcase their art, learn to skate and perform their music live. We want to extend that creative energy outside the walls of House of Vans, further giving the next generation the tools needed to discover their creative talents.”

Laura Jane Grace & Against Me! Appear on Late Night with Seth Meyers