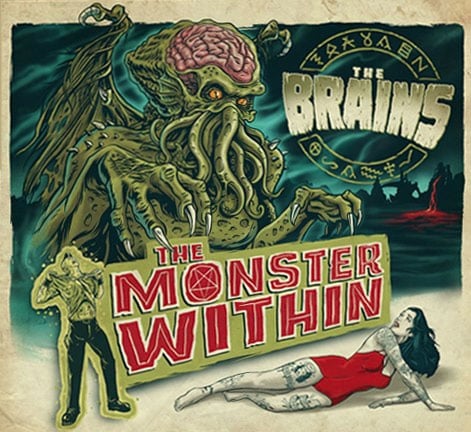 Psychobilly horror-punk band The Brains have signed with PA’s Sailor’s Grave Records. Their last album was great so I’m looking forward to hearing new music from them! The label plans to release their new album, The Monster Within, in the U.S., digitally on April 16th and on CD on May 7th.

“We are extremely happy to be releasing our new album The Monster Within with our good friends over at Sailor’s Grave in the USA,” says The Brains’ vocalist/guitarist Rene D La Muerte. “I had the pleasure of producing and mixing the last Koffin Kats album and heard lots of good stuff about the label. With the record coming out on People Like You in Europe, Stomp Records in Canada and now Sailor’s Grave in the US, I can’t think of a better group of people to help fulfill our master plan of world domination.”

“We are very excited to link up with The Brains for the US release of The Monster Within,” adds Andy King of Sailor’s Grave Records. “The band’s psychobilly and punk credentials are unquestionable and this record is a treat as expected. We are happy to welcome them to the SGR family.”

The Monster Within is an unholy collection of mind-bending, ear-scorching tracks that grab you by the neck, stare straight into your eyes and dare you to fight back. The impossibly fast, tight rhythm section of Pat Kadaver (skins) and Colin The Dead (stand-up bass) threaten to push the limits of sanity and safety to the very edge… Rene D La Muerte’s (vocals/guitar) haunting croon sends shivers up the spines of even the most jaded listener while his signature guitar stylings fuse the rockabilly sounds of the 50’s with the intensity of a chainsaw-wielding maniac in a pitch black room full of teenagers.

The Brains continue to blur the lines between rockabilly, psycho, punk and rock n’ roll; kicking down genre barriers and demanding undying loyalty at every show they play. Incorporating elements from whatever the hell they feel like, The Brains concoct an irresistible brew of Motorhead-esque ferocity and sexed up Latin swagger while adding a pinch of new-wave and a whole lot of booze-fueled punk rock mayhem.

Montreal’s undead band will take their haunting psychobilly on the road for a handful of Canadian dates with a U.S. run in the works for later this year.

Visit SailorsGraveRecords.com for more information and updates regarding The Brains’ new album The Monster Within.

Stay up to date with the Brains on Facebook.

pyschobilly, Sailor’s Grave Records, The Brains, The Monster Within