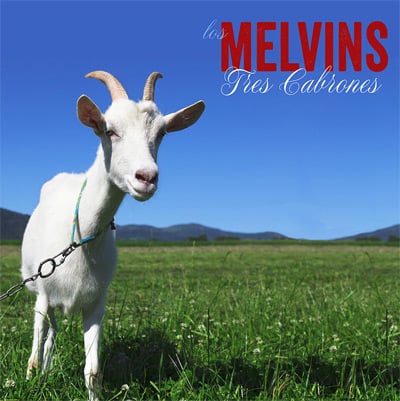 The Melvins are releasing their next album called Tres Cabrones on November 5 via Ipecac Recordings. The new album is a 12-song release that finds Buzz Osborne and Dale Crover reuniting with original drummer Mike Dillard. The band is currently on tour in the South and then out West.


“Tres Cabrones is as close as we’re willing to get to the Melvins 1983 line-up,” explained Osborne. “The best part is it’s all new songs. I specifically wrote tunes that would be good for these guys to play and it worked out great. We had no interest in rehashing tunes we wrote 30 years ago and chose instead to simply create NEW songs. It worked out perfectly.”

“Making the Tres Cabrones record was a real treat indeed. It’s a trip down memory lane complete with debauchery and ultra violence, ” said Dillard, who left the band in 1984 only to be replaced by Crover.

“After 30 years we release a record with the (almost) original line-up of the band,” added Crover. “I’ve always felt that drummer Mike Dillard was one of us. It’s great that he’s still a piece of the puzzle! Plus, I get to see what it’s like being the bass player in the Melvins! Tres Cabrones indeed!”

The Melvins annexed Big Business band members Coady Willis and Jared Warren in 2006 for (A) Senile Animal and the quartet has remained in this incarnation for four additional releases including Everybody Loves Sausages, a covers album released this spring. Not ones to relax, the Melvins introduced Melvins Lite, a version of the band that teams Osborne and Crover with Trevor Dunn (Tomahawk, Mr. Bungle). Melvins Lite released their debut album, Freak Puke, in 2012 and subsequently embarked on a 51 date/51 State (including DC) tour of the United States.

The Melvins are currently in the midst of their 30th Anniversary Tour in their ongoing four-piece iteration (father-to-be Jared Warren is on paternity leave with Butthole Surfers’ bass player Jeff Pinkus filling in). The band plays The Loft at Center Stage in Atlanta this evening.