Sometimes, the most unique and special sounds are the most organic. For singer/songwriter/multi-instrumentalist Xavier Rudd, connecting land and heart isn’t a matter of conscious art but a humble understanding that everything before us will remain long after we are gone. Crossing cultural lines from the modern world to that of the Aborigines, Rudd continues his journey to become one of Australia’s most iconic voices today with the release of his seventh album (and first for SideOneDummy) Spirit Bird on June 5th, 2012.


A performer who truly lives to the natural beat of the world, Rudd fuses hypnotic ceremonial rhythms into tender and breezy folk songs, creating a vibe and tone that is unmistakably earthy and excitingly expansive. Not afraid to kick off an album with didgeridoo, rain forest sounds, and aboriginal chanting like he does with opening track “Lioness Eye”, his fearlessness in experimentally incorporating indigenous sounds and rhythms is rarely, if ever, seen in pop music.

Accompanied by a plaintive harmonica and acoustic guitar, “Comfortable In My Skin” sets the breezy tone that hearkens Chuck Ragan in a more contemplative mode or what Bob Dylan would have sounded like if he surfed. The lead-off track, “Follow the Sun” ebbs and flows hypnotically, with a lilting guitar line and a flitting harmonica that propels you forward in a breezy haze. Where most modern artists pile on electronics with studio effects, Xavier strips everything down to rhythm and melody, painting breathtaking pictures with broad tonal brushstrokes and his smooth and soothing vocals. By incorporating aboriginal chants into the fabric of the title track, Xavier constructs an epic goose bump-inducing song that soars in otherworldly bliss, cathartically crashing into a whispered hush.

Releasing his debut To Let in 2002 to local acclaim, Xavier’s weaving of native music into his folk music helped reintroduce Australians to the sounds and stories of the land’s original owners while revealing an entirely new sound to the rest of the world. Building a strong reputation on his live performances, he has traveled the world playing festivals such as Bonnaroo Music Festival, Lowlands, Rock Werchter, The High Sierra, Wakarusa, etc. as well as touring with Jack Johnson, Dave Matthews, Ben Harper, G.Love and Rodrigo y Gabriela.

Spirit Bird will be released on SideOneDummy Records on June 5th, 2012. 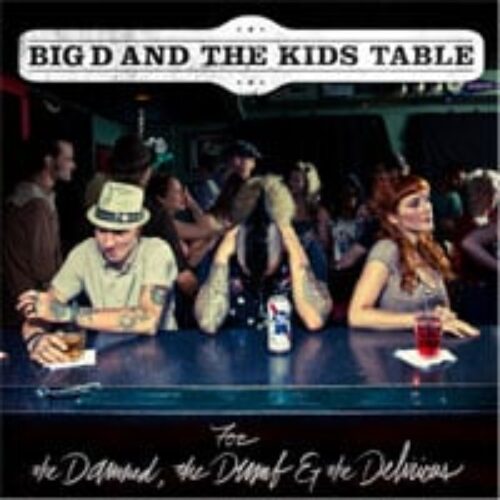 Big D and the Kids Table – “For the Damned, the Dumb & the Delirious”