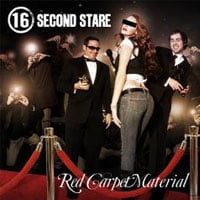 16 Second Stage is a hard rock band influenced by metal, and hair metal bands from the 80s. Or so it sounds like on their debut album “Red Carpet Material.” I’m not sure what to make of this band or this CD. I basically think they sound like a bar band.

I tried to put the album on as I was reviewing this but I just ended up skipping most of the tracks. If I had to pick any standout tracks, they would be “Ballad of Billy Rose” and “Smash.” I’m afraid if you don’t like hard rock, heavy metal, and southern rock; you probably won’t like 16 Second Stage. I could only tolerate one or two songs from this album, because this type of music isn’t my thing. Well not anymore, maybe back in the 80s.