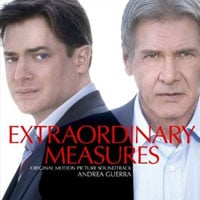 The latest Harrison Ford movie that no one saw (including myself) was a movie called Extraordinary Measures. The movie is based on a true story and is about parents who form a biotech company to develop a drug to save their children’s lives. The children have Pompe’s disease. The drama was directed by Tom Vaughn, who also directed the comedy What Happens in Vegas. The film stars Harrison Ford, Brendan Fraser and Keri Russell. The film came out back in January but was just released on DVD & Blu-Ray.

The film score was composed by Andrea Guerra, who I haven’t heard before. The Italian composer has done scores for The Accidental Husband, Hotel Rwanda and The Pursuit of Happyness. I haven’t seen those movies either but the score for Extraordinary Measures is a nice surprise. The score is light in the beginning; filled with oboes, pianos, strings and has a contemporary sound to it. For being a film score album, this CD isn’t very long. Most tracks don’t go past 2 minutes. What is this, punk rock? Based on the music alone, I would listen to this again. It’s pleasant and something you’d typically hear in a light-hearten drama. This score definitely put Andrea Guerra on the map for me.

Bottom Line: For not knowing about Andrea Guerra, I will start to notice his scores more often!
Notable Tracks: Extraordinary Measures, Desperation, The Lake
Overall Rating: