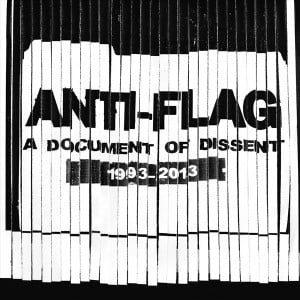 Let’s be honest, if you like punk music and haven’t heard of Anti-Flag then you need to drop everything and go listen to some of their stuff now. Definitely one of the most popular current punk bands and for good reason.

This review gave me the perfect excuse to just listen to more Anti-Flag. The band have released their Best of album titled ‘A Document of Dissent – 1993-2013’ under Fat Wreck Chords containing two decades of music that represent Anti-Flag’s message and sound very well.

The 26 track album has a great varying tracklist which covers all of the changes Anti-Flag have made to their music throughout the years. The album has a great start with ‘Die For Your Goverment’ and continues to get better as the album goes on with the most notable tracks to me being: Fuck Police Brutality, The Press Corpse and 911 For Peace.

The album keeps a great mix of their fast and in your face songs such as ‘Spaz’s House Destruction Party’ and their slightly quieter songs such as ‘Turncoat’ and ‘1Trillion Dollars$’ and is definitely worth the price! For just $10(£5.86) you get the MP3, seems great but you may as well make it $12(£7.03) more and get the hard copy on CD as well as the MP3 download and if you like vinyl throw in $20(£11.72) you get the vinyl and an MP3 download. (Prices as if ordered directly from Fat Wreck Chords)

I highly recommend picking this up whether you are a long time Anti-Flag fan or you are just getting into them and want to hear more. This is a great selection of their best tracks.

Bottom Line: It’s Anti-Flag, if you like them you’ll like this. If not it’s the perfect place to start
Notable Tracks: 911 For Peace, The Press Corpse, This Machine Kills Fascists, Die For Your Government
Overall Rating: