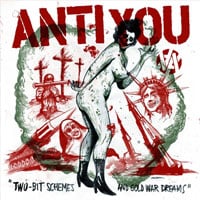 Anti-You play classic 80’s American style hardcore; only thing is they are from Italy. If you’re expecting long, epic length songs, don’t even bother putting this album on. Songs range from 30 seconds to a minute & fifty four seconds. Anti-You is a band that ADD people can listen to!

I never heard of this band but was impressed how much they have an American hardcore sound. The music is fast, gritty and I can just picture kids kickin’ their way in the pit & stage diving. There aren’t that many songs that stand out per say, because they sound the same to me for the most part. The overall album is killer though, and something to listen to get nostalgic of the 80s hardcore scene.