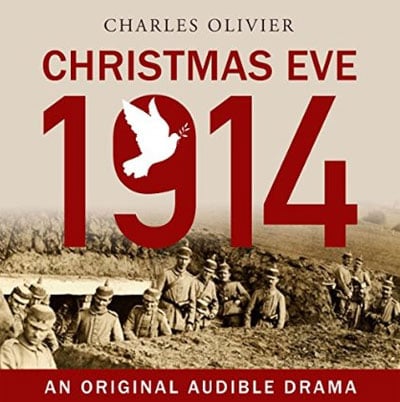 100 years ago, World War I was supposed to be over by Christmas 1914. Christmas was only just the beginning of the Great War. During Christmas in 1914, both sides of the War ended up having an unexpected truce and ceasefire for the day. This audiobook / drama is based on real life events and focuses on a British company that comes to terms with being on the front lines for Christmas. This is currently being offered for free so be sure to get this if this sounds like your thing.


I’ve listened to a few audiobooks but haven’t really listened to one where it’s like an old-time BBC radio drama. The hour and 15 minute presentation is impressive, complete with sound effects, a score and narration and dialogue from Cameron Daddo, James Scott, Xander Berkeley (24, T2), Damon Herriman (Justified), Cody Fern, Nate Jones and others. I didn’t even see who was doing the acting in the audiobook before I started it but the accents were convincing. I thought everybody in the drama were British but in fact they were Americans and Aussies for the most part.

I’m more of a WWII buff than WWI buff but it’s still a fascinating subject. For just an hour and 15 minutes, this was perfect for my commute to work in the morning. Hearing the drama and the acting unfold, it was easy to imagine what it was really like to be in those trenches, but also to experience the surrealness of having handshake with your enemies for a day. I’m hoping to hear more audiobooks like this one in the future. I’d love if they did a radio play of Band of Brothers or something similar.