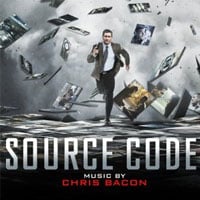 Source Code is out in theaters now, and the census is that it’s a cool movie that mixes sci-fi and technology thrillers? I don’t even want to attempt to explain the plot to you, because I barely know anything about it myself. Jake Gyllenhaal plays an airmen who can go into people’s bodies during the last 8 minutes of their life? Kind of scary and nifty at the same time. The movie sounds interesting so I’ll see it when it comes to Blu-Ray.


Composer Chris Bacon is a newcomer on the score scene. He has done additional score work on some movies, and has only composed a handful of scores like the recent Gnomeo and Juliet and Waking Sleeping Beauty documentary. The score for Source Code is a bit quiet, and mysterious…at least the first half of the score. The movie is a “techno-thriller” so there’s some computerized stuff in there as well, but in a subtle way. The music sounds more like someone sneaking around. That tip toe in a room so you won’t be heard type of music. If this score was just a standalone score, I wouldn’t know what to think of it. It’s just a bit to quiet for me, and not that interesting. It’s mood music for the movie, and doesn’t really work alone on CD.

Bottom Line: Could have been a lot better
Notable Tracks: Main Titles, Everything is Gonna Okay
Overall Rating: