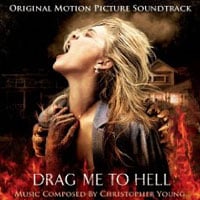 Sam Raimi is back making horror flicks, something he was born to do. He hasn’t done a horror movie since the Evil Dead movies. Since he has a few more movies under his belt, I’m sure this is ten times better than what he started out making. Drag Me To Hell is about a loan officer who turns down a loan, and gets cursed in the process. If she doesn’t pass along the curse, she gets sent to Hell. So this is family film then?

Christopher Young was picked to score the movie, and Young is no stranger to horror and thriller movies. You might have heard Young’s music in Hellraiser, Nightmare on Elm Street 2, Tales from the Hood (maybe not), The Gift and Spiderman 3. Spiderman 3 isn’t horror but maybe it should be after seeing Peter Parker dance. Young inhabits the score style that I hear a lot in Sam Raimi’s movies. Think of this as a cross between Army of Darkness and the Spiderman scores. Occasionally, there will be some chanting or scary type of singing in it to reassure you that you’re listening to a scary film score. Other things that add to the scary score include screechy violins, loud thundering drums and motifs that just pop out of nowhere (“Ode to Ganush”). Other tracks are just pleasant like “Familiar Familars,” and “Brick Dogs la Carte.” I felt “Auto Da-Fe” was the best track on the album. That track just screams Raimi to me. If you liked the music from movie, check this out!

Bottom Line: I don’t really like horror scores all that much but this was decent.
Notable Tracks: Drag Me To Hell, Brick Dogs la Carte, Auto Da-Fe
Overall Rating: