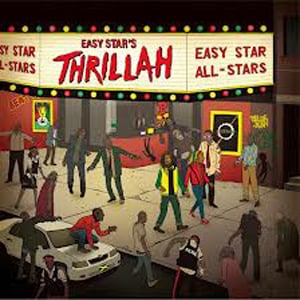 “Thrillah” is the follow up album to 2009’s “Lonely Hearts Dub Band”. Instead of covering the acid rock pop sounds of the Beatles in the 60’s the Easy Star All-Stars tackle one of the greatest pop albums of the eighties and arguably of all time…Michael Jackson’s “Thriller”. The sound is quite honestly a match made in heaven.

With most great reggae artists it’s a well-known fact that the vocals and the melodies are the core component to any great song. The vocals take center stage to the laid back background grooves of the rest of the band. The music sets up the harmonies and melodies that carry a great song. Here you have one of the greatest harmonizers in music period with Michael Jackson. Take that and add the perfect mix of reggae, dancehall and dub and what comes from that concoction is a re-invisioning of a classic album.

From the very start of “Thrillah” with the horn heavy, funk infused seminal hit “Wanna Be Startin’ Somethin’”, you know that you’re in for treat. The vocals and the harmonies sound so familiar, but the Easy Star All-Stars mold and shape the song into a driving funk number without second thought. “Baby Be Mine” is an upbeat danceable straightforward reggae track while the standout cover of “The Girl Is Mine” is a great mash up of the classic Michael Jackson sound on top of the sweetest reggae beats in the West. After the introduction to the first part of the album, one of the coolest sounding versions of “Thriller” that I’ve ever heard sends chills down my spine and takes me back to the days when I was just a kid and discovered the original version of the song for the first time. The bass line is a driving beast that compliments the reggae upstrokes and the horns that pop in from time to time remind me of the fog that appears in the video…they are ever so haunting. Some of the highlights of rest of the album consist of a slow dubbed out version of “Beat It”, a very powerful horn heavy reggae version of “Billie Jean” (one of my favorite MJ songs of all time) and a female fronted version of “P.Y.T. (Pretty Young Thing)”.

I’ve always been a fan of cover songs and cover albums in general, but I only ever recall a couple of Michael Jackson cover songs worth mentioning. I would have never thought about what the entire “Thriller” album would have sounded like if it were a reggae album. What the Easy Star All-Stars have managed to do is seamlessly transform the pop sounds some of Michael Jackson’s biggest songs into one of the smoothest reggae albums out there today. The band manages to take many of those songs and make them their own, but with the care and respect that only true fans of MJ’s could. It must have been a daunting task, but the Easy Star All-Stars were most definitely up to that task. “Thrillah” is another strong showing from the All-Stars and one of the best true reggae albums that I have heard in years. Michael Jackson and reggae? Who’d a thunk it?

Bottom Line: An amazing reggae album of cover songs from one of the most unlikely sources. This is totally worth multiple listens. You’ll recognize the songs, but with a whole new spin on them.
Notable Tracks: The Girl Is Mine, Billie Jean, Thriller, Beat It, Wanna Be Startin’ Somethin’
Overall Rating: