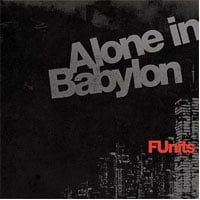 New York’s F-Units sound like they grew up in a nursery that pumped them full of nothing but 90’s alternative rock radio. They’re sound is heavily influenced by the sounds of Soundgarden, Green Day and Caroline’s Spine.

The tracks are catchy fast-paced rock and roll with guitar solos around just about every corner. Sprinkled throughout are offshoot instruments like a violin here, a trumpet there, that add another layer to an overall solid track. What stands out to me the most is how
much the F-Units rock. A band like them would be a welcome breath of fresh air into the very stale rock airwaves. Their driving drums, flesh melting string shredding and well produced tunes could slap Dave Grohl in the face and bring him back into the world of
rock.

F-Units are not only impressive musically but are completely DIY. Every aspect of “Alone In Babylon” was produced, designed, advertised by the band themselves and, for the quality of the final product, is very impressive.

“Alone In Babylon” is a sound that has been missing in the rock scene for a seemingly long time. It definitely invokes 1994 in all of the right ways (that means no R.E.M.) without trying to hard to mimic any particular band. F-Units’ sound is definitely their own and I sure as hell enjoy it.