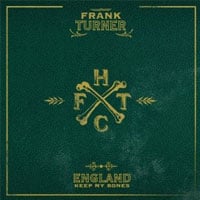 Frank Turner has come a long way in such a short time period of being a musician. He’s become the Billy Bragg of our generation. They both mix punk ideologies and folk music; it’s a winning combination that has worked for years. His latest album, England Keep My Bones, may arguably be his best work to date.

I’ll be honest, it took me a few listens to really get into England Keep My Bones. I felt something was lacking or missing, like that punk punch or powerfulness of some of the songs was gone. The more I listened to this, the less and less I feel that way. Turner’s new album has taken the next step of not just being considered some punk musician who has gone the way of the folk. Frank Turner & his backing band is something much more than that now. You can just hear how well these songs were constructed and see how much Turner has grown since first starting out in post-hardcore bands.

The fans first got to hear “I Still Believe” off his EP earlier in the year and that was a fantastic anthem piano-driven song. “Peggy Sang The Blues” is his newest single and it’s a solid tune. However, I feel his songs “Rivers” and “English Curse” really stand out. “Rivers” almost sounds like a Levellers songs to me. The song is beautifully sung and has some fiddle playing. “English Curse” stands out because the song is just Frank singing with no music at all. I believe Frank found an old English folklore story from way back when and turned it into a haunting, poetic song. I can’t wait to hear that one live.

The last song on the album is doozy and one that would probably make George Carlin very happy. It’s called “Glory Hallelujah” and the chorus goes something like this: “There is no God, So clap your hands together, There is no God, No heaven and no hell.” I’m sure Frank Turner will alienate some fans with that song but sometimes people need to point out the stupid things they believe in.

I originally had a sense of disappointment with England Keep My Bones but that quickly went away. I realized once I kept deciding to listening to this new album over and over that I really love this album. I’m not sure if it’s my favorite but it’s definitely up there with Love, Ire & Song.