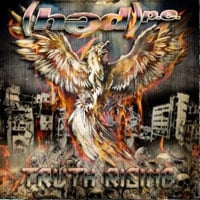 Truth Rising is Hed PE’s 8th studio album but this is the first time of hearing about the band. I have a question, how the hell do you pronounce the name of the band? Some places say (hed) p.e., some say Hed Pe, some say Hed Planet Earth. I don’t know, their name should probably be less confusing.

It’s hard to classify what Hed Pe is. Some songs they sound like they play punk, then it’s hardcore, then it sounds like they want to play rap, then it sounds like they want to be System of the Down. I really don’t know what to think of these guys because their songs aren’t consistent. Songs like “No Rest For The Wicked” mix rap and metal, which is probably something they should stick to if they had to pick just one style to play. Whatever style they play, their music is very bland to me. I like their political messages behind songs but musically, this isn’t something I’d listen to again.

Bottom Line: Sort of like Fishbone but not as good, and not ska…and more annoying. Ok that’s a bad analogy.
Notable Tracks: No Rest For The Wicked
Overall Rating: