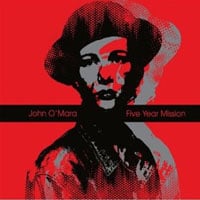 Described as some as “electro-folk,” John O’Mara’s one-man-band sounds more like a sadsack doing karaoke to Ziggy Stardust-era Bowie.

While the vocals aren’t strong (they’re often smoothed out by echo effects), the music works well. In the first half, O’Mara taps into late 70s new wave and 80s synth pop with decent results. Midway, O’Mara moves away from the retro pop and more toward moody shoegaze, which, while not as stylish, better fits his somber tone.

I have to wonder, though, how much better this could be if, instead of spacey new wave, O’Mara married his murky gloom with a modern, bloopy-bleepy Postal Service-y style.