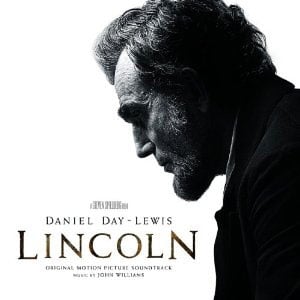 John Williams is my favorite composer. He’s the reason why I got into film scores in the first place. I’ve been looking forward to this Lincoln score for a while, but not sure what to think of it yet. The score sounds beautiful but slow at times. Could that be a bit of foreshadowing on the movie itself? Guess I’ll find out soon when it opens November 9th.


We’ve heard pieces of this before in the Lincoln trailer, which seems rare for a movie trailer to actually use pieces from the movie itself. “The People’s Houses” is a goosebump-giving theme for the movie. All the pieces you heard in the trailer are in this track. We hear those motifs throughout the score, along with some other subtle ones. I love the trumpet flare at the end of “The People’s Houses.” It gives a sense of the time period and military battles. That track is textbook John Williams!

Lincoln feels a little different from Williams’ last 2 scores in War Horse and Adventures of Tin Tin. If anything, it sounds like more War Horse. This score has a lot mellow type of tracks but then you have something like “Getting Out The Vote” that is a bluegrass instrumental that stands out. That was one of my favorite tracks. “Call To Muster and Battle Cry to Freedom” is the only singing track and it sounds excellent! Military drumming, flutes and singing “Battle Cry To Freedom,” which was written during the Civil War and is patriotic song for the Union. I would love to hear this one live at Boston Symphony Hall next year if John Williams plays there. I have a feeling if I heard some of this music live, the waterworks would be flowing.

“The Race to the House” is another bluegrass sounding track. I have a feeling we’ll probably get another Lincoln album that contains more of these tracks, or “inspired by Lincoln.” I wouldn’t mind a whole album of instrumental bluegrass and Civil War era songs that appear in the movie.

I’ve listened to the score three times now, and each time it grows on me more and more. It’s not the big-bang John Williams/Steven Spielberg collaboration that we’re used to but it’s a pleasant & soothing score with a quite a few standouts. The score reminds me of other Williams scores like War Horse and the Patriot. If this is John Williams last film score (and I really hope it’s not), the legendary composer will end on a somber note.

Bottom Line: Civil War era sounding-score filled with somber tracks but damn, they sound good!
Notable Tracks: The People’s Houses, Getting Out The Vote, The American Process, Call To Muster and Battle Cry to Freedom, The Race to the House, Peterson House and Finale
Overall Rating: