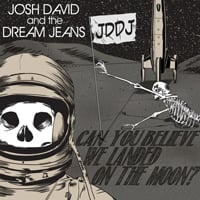 Every now and then an album comes along that is completely and utterly unlistenable. “Can You Believe We Landed on the Moon?” is just such an album.

Within the first two minutes of this album, I wanted to take it out of my computer and throw it out the window. I decided that I may be jumping to conclusions and skipped through the rest of the tracks getting lost along the way. My only sense of enjoyment was the simple fact that I had finally run out of songs.

For punk bands, Josh David and the Dream Jeans are pretty bad. I would assume that they are either A) trying to emulate the awful recording techniques and noise punk sounds of the 70’s and if so why? or B) are really not good…AT ALL. I know people that are on Welfare that have better recording gear than JDDJ. The vocals are garbled and nonsensical and the songs lack any semblance of structure whatsoever.

If, for whatever reason, you feel like you need to listen to this album, don’t. Do yourself a favor and listen to a goat getting castrated. You’ll thank me for it.

Bottom Line: A bunch of noise with a guy shouting over it and I think there are some drums.
Notable Tracks: None. I didn’t know where one song ended and the other began.
Overall Rating: