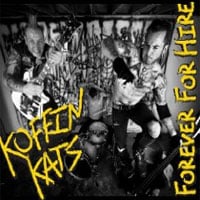 Koffin Kats hail from Detroit and play punk rock and rockabilly. Imagine the Bat Commander of the Aquabats singing in a rockabilly band and you have Koffin Kats.

The opening of the album sounds like something straight out of the Haunted Mansion at Disney. I need more of that sound on this album. The backing band sounds really good but I’m having a hard time of liking this band because of the vocals of Vic Victor. Like I said before, he sounds like the Bat commander of the Aquabats or Dave Vanian of the Damned and his singing style is distracting. Some songs, his vocals sound fitting and really good, and other times I want to skip to the next song. It’s something that takes time getting used to. With rockabilly and psychobilly bands, they tend to sound the same so I’ll give the band full marks for sounded a bit different from the rest of the pack. The songs that stood out were “Wild Ride,” “Saw My Friend Explode Tonight,” “Small Block & Flathead.” I think with more listens, I’ll like this album more.