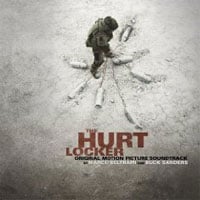 The Hurt Locker came out in the summer time and I unfortunately missed it. But it’s available on video now so I’m sure I’ll check it out shortly. In the meantime, the movie has been getting a lot of recognition this award season. It’s been nominated in almost all awards and it looks like a terrific movie. An intense one as well! The score is also available now but i’m not sure how I feel about it yet.

The score is composed by Marco Beltrami and Buck Sanders. I’m not really familiar with Sanders but apparently he has collaborated with Beltrami on previous scores (Max Payne and others). Marco has composed the score to such movies like Scream, Hellboy, Terminator 3, and 3:10 to Yuma. The later three I particularly like.

Before even listening to the music, I knew this one would be very subtle and I was right. The Hurt Locker doesn’t seem like it would be filled with lots of John Williams style motifs. The movie itself looks thrilling and suspenseful, and that’s exactly what the composers delivered in the score. Not like horror style suspense score but more like quiet suspense. I’m not a fan of this style of film scores, especially when listening to it on CD. I’m sure the style fits the movie quite well; it probably even adds to the movie with the suspense. The only track that really stands out is “Guest in My House.” It’s the loudest track, and the use of the instruments is unique. It sounds like musicians are taking hacksaws to their instruments. It seems a lot of musicians are doing what Hans Zimmer did for The Joker theme in The Dark Knight. I also liked the last track “The Way I Am,” which sounds very Western-ish. Perhaps I would appreciate the score better once I see the movie?

Bottom Line: I’m sure the score works well in the movie but on CD it’s too subtle for my liking.
Notable Tracks: Guest in My House, The Way I Am
Overall Rating: