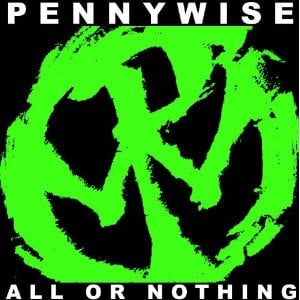 After Jim Lindberg left Pennywise to be a “Punk Rock” Dad in 2009 and be closer to his children, the state of Pennywise was left up in the air. In early 2010 Zoli Teglas, formerly of the California Hardcore punk band Ignite, joined the band and has been touring with Pennywise since. Teglas’ introduction into the group, also reinvigorated them as they went into the studio to deliver one of their best albums to date, in “All or Nothing.”

Zoli Teglas brings a different element to Pennywise while still keeping Pennywise true to who they are. “All or Nothing,” features fast paced, rapid fire tracks as these 12 cuts just fly by on the record. With furor, these are songs that will be explosive live with plenty of chants and sing alongs for the crowd to get behind like in “Stand Strong,” and “We Have It All.”

I like what Zoli has brought to the group and think he’s a better singer than Jim but they both have their place. Fletcher and the other members seem to have taken the new addition as a creative resurgence as “All or Nothing” has no dull moments. I can already picture the insane circle pits that will be forming for these new tracks. After seeing the documentary that Jim Lindberg put out about being a “Punk Rock” Dad and ultimately his decision to leave the group after this being his whole life since 1988. I can also see why Pennywise wants to continue. Here is a group that is now considered an elder statesmen in the Punk Rock world and touring is important to the fans, not to mention this is a career to them.

Bottom Line: Fantastic record and one of the best they have ever made
Notable Tracks: Revolution, X-Generation, Stand Strong, All or Nothing
Overall Rating:

All Or Nothing, Epitaph, Fletcher, Jim Lindberg, Pennywise, Zoli Teglas