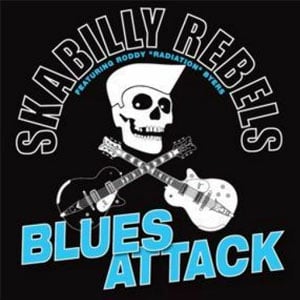 Since 2003, Roddy Radiation of the Specials’ solo band has been the Skabilly Rebels. If you haven’t noticed just by the name, the band mixes ska and rockabilly and I can’t think of anybody more fitting to play that style. Roddy has been in ska and rockabilly bands before so it makes sense. Blues Attack is a 7-song album (at least that’s what was given to me) that will make you want to skank while thinking about vintage cars, pin-up gals and pompadours. What other rockabilly cliches am I forgetting? haha.


The title track “Blues Attack” starts off the album nicely. I prefer the next two songs (“Black Zodiac,” “Forgive and Forget”) which are more ska-ish. Roddy’s vocals are just as impressive as his bluesy guitar playing. It’s something about those rockabilly guitars that I love. They are the hollow body guitars right? If I had a lick of musical talent, I would want to play those. Anyway, the guitar playing on this album is outstanding! I knew I would like this album because I loved the Specials ‘90s album “Guilty Til Proved Innocent.” Roddy’s guitar playing and vocals are heavily used on that album because Terry Hall wasn’t with the band back then. Plus, hearing “Concrete Jungle” live at Specials’ shows is always a highlight of mine.

If you’re expecting overused “pick it up” sayings and horns, then don’t listen to this album. This is for the more sophisticated ska fans out there.