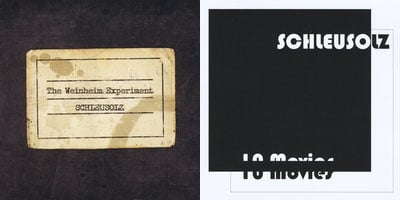 This German duo serves up what their press release calls “retronica.” Neat phrase and I haven’t heard it before, but my ears and common sense tell me “retronica” is a modern take on older synthy/electronica eras. While 8-bit/chiptune is the (old) new flavor of the month, Schleusolz’s retronica journeys into all worlds of lost and forgotten electronica, for better or worse.

It’s impressive that Schleusolz covers a sizable gamut of bleepy nostalgia, sometimes within the same song – Esquivel’s orchestral space-age exotica/lounge from the late 50s and early 60s; dance, disco, and proto-synth from the 70s; 80s Human League/Gary Numan new wave; 90s industrial; and, yes, today’s chiptunes, of course a throwback of its own.

The duo is as prolific as they are eclectic, releasing two tonally different albums at once. While jazzy and loungey at times, The Weinheim Experiment is more about mashing up synthy sounds in an avant-pop format. 10 Movies also incorporates synth and space-age elements, but is otherwise orchestral and focused entirely on creating cinematic soundscapes to score imaginary films.

As a whole, TWE is interesting, but Schleusolz frequently stumble by being so… German. The tunes on TWE that lean further into disco, dance, and industrial have that cheesy Euro trash sound, like the bad gym music in my Russian/Polish neighborhood. It was cheesy back then and no amount of time will improve it. The Rammstein-like vocals on “Sid Goes Dancing” and falsetto disco singing on “She Became My Toy” are cringe-worthy.

Also embarrassing on TWE are the forays into world music, like “Itai-Itai” and “Wuhguhzouboo”, whose ching-chong melodies and primitive chanting (supposed to be African? Native American?), respectively, are borderline offensive. Actually, they’re well over the border.

But the orchestral and jazzy soundscapes on TWE are entertaining. The Philip K. Dick-inspired “Perky Pat” is a jaunty big band number and “The Secret Acid Life” has a cute merry-go-round feel. On the synthy side, “Sell Your Soul” is dark and moog-fueled, somehow channeling both Wire and Rush; “Johnny Boy” is an upbeat ditty that reminds me of Mollusk-era Ween.

I had higher expectations for 10 Movies. I was hoping for more of the playful Mancini/Esquivel quirkiness I heard on TWE, but 10 Movies is gloomy and uninspired. At best, it channels some of Zappa’s more serious classical works and (hopefully ironically) the bad sci-fi scores of the late 70s/early 80s. At worst, it’s just a plodding waste of time.

31 songs over two albums is an ambitious project, and perhaps it’s hard for a non-fan to soak up. But while I like the concepts here, others execute it with better quality and imagination. The space-age works of J.G. Thirwell, for instance, would be a more consistently enjoyable choice.

Bottom Line: A handful of good songs out of 31. Pop in Steroid Maximus instead.
Notable Tracks: The Numberer, Perky Pat, The Secret Acid Life
Overall Rating: