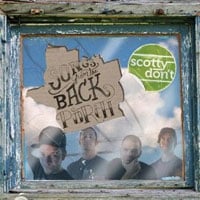 Scotty Don’t consists of members of Badfish, the Sublime tribute band from Rhode Island. Vocalist Pat Downes wanted to create original music, and that’s how Scotty Don’t started out. For those of you out there that want to know how the band sounds, let’s just say the Badfish members can’t let go of the Sublime influences.

The band blends rock, ska, hip-hop, reggae, dub together (aka Sublime) and while some people will like this, I thought they could have done something else. If you’re going to do original music, why make music that still sounds like Sublime? Why can’t Badfish just play the original songs too, and then you don’t have to have 2 band names? Maybe I’m missing something. The album gets better as it goes along, and I like the laid back reggae rock sound. Every time I hear Downes sing, he sounds like Brad Nowell though. If you can get over the fact that the band sounds like Sublime a little, then check Scotty Don’t’s latest album.

Bottom Line: A good album but I think the band needs to let go of the Sublime thing.
Notable Tracks: Movies on TV, Falling Down, Refugee
Overall Rating: