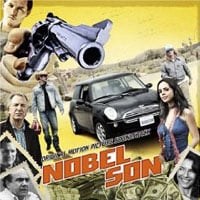 Nobel Son came out back in November but I’m just getting around to reviewing the album now. Why still review it? Hey if an album cover has a hot Eliza Dushku on the cover, I’ll review it. Nobel Son is a black comedy that is about a dysfunctional family that deals with a kidnapping. It stars Dushku, Alan Rickman, Mary Steenburgen, Bill Pullman and Danny DeVito.


The soundtrack comprises of techno & electronica music from Paul Oakenfield; plus music from The Chemical Brothers, Blossom Dearie, Bad Apples, Groove Armada, and Emjay & The Atari Babies. The Paul Oakenfield tracks are the highlight of the soundtrack, which are located towards the end of the CD. The other tracks are cool to listen to, but I have to be in the right frame of mind to listen to it. Something tells me this soundtrack would have worked better with The Bourne movies or Italian Job. The music seems to fit an action movie, but then again; I haven’t seen Nobel Son yet.